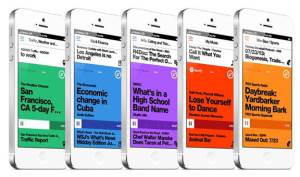 If you spend a lot of time listening to content on a smarthone or tablet, there’s a good chance that experience is spread across multiple services — maybe one app for music that you’ve actually downloaded, another for Internet radio, another for podcasts, and so on. Now a startup called Agogo is releasing an iPhone app to bring all that content together in one place.

J.D. Heilprin, the company’s founder and CEO, said he’s spent the past decade exploring the new ways that technology enables consumers to access media — for example, he was a co-founder at RioPort, an online music store that was a precursor to iTunes. (Heilprin seemed a little embarrassed but mostly proud when he recalled the section in Walter Isaacson’s Steve Jobs where the iTunes team is testing the Rio and other music players and saying, “These things really stink.”) He also founded Modern Feed & Supply, which launched as online video guide Clicker and was acquired by CBS.

Heilprin told me that he got the idea for Agogo while driving across the country and finding himself constantly “futzing” with all of his devices in order to listen to different content. He even showed me a photo of tablets and phones piled up next to his car radio — I’m not sure how many people actually go that far, but I’m on-board with his broader point, that a lot of audio content is stuck in “all these silos.”

When I first heard about the app, I thought it might compete with “Pandora of talk radio” app Swell. And it does in a sense, since if you get all your audio needs out of a single app, you probably don’t need Agogo.

But this isn’t just about news radio. With Agogo, you have access to a wide range of content from a single app. You can listen to music, podcasts, audiobooks (though there are only samples, not full books, for now), and TV content — when Heilprin demonstrated the app for me, he played audio segments from The Daily Show. Agogo even gives you traffic alerts for your commute. The idea, Heilprin said, is to create something free that “from day one is better than the satellite radio that you pay for.”

In order to bring all that together, Agogo takes advantage of a number of existing services. For example, you can use the app to listen to music that you’ve downloaded to your device, or sign in to your Rdio and Spotify accounts. For its traffic alerts it uses data from Bing and Clear Channel.

The strategy, Heilprin said, is to build a broad experience but only go deep when absolutely necessary. For example, Agogo includes sports content, but, “We don’t intend to build the full functionality. If you want to have a deep experience with [Major League Baseball], you’re going to go use those other products.”

Heilprin added that he’s focused on premium, legal content — in other words, the kind of content that you should recognize when it shows up in the app. In some cases, that will mean building a direct relationship with content providers. In others cases, the app just aggregates content like podcasts that are already available for free online.

Heilprin added that the team has done a lot of work to try to make the experience as easy to use as possible, which was particularly challenging given all the different content types that Agogo is working with. The main way to navigate the app is by browsing different channels — there are a number of curated channels that you can access from the home screen, but you can also turn any program or topic into a channel. (This gets particularly interesting when Agogo builds channels around musicians, since those channels can mix content like news and interviews in with their actual music.)

Agogo has raised a seed round of funding as well as a $2 million “pre-A round,” Heilprin said. For now, it’s focused on acquiring users, but eventually he plans to make money from advertising and premium services.