Spun 2.0 Upgrades Local News by Ditching Location
So Far, There Are Only 3 Big Winners in the Smartphone Market 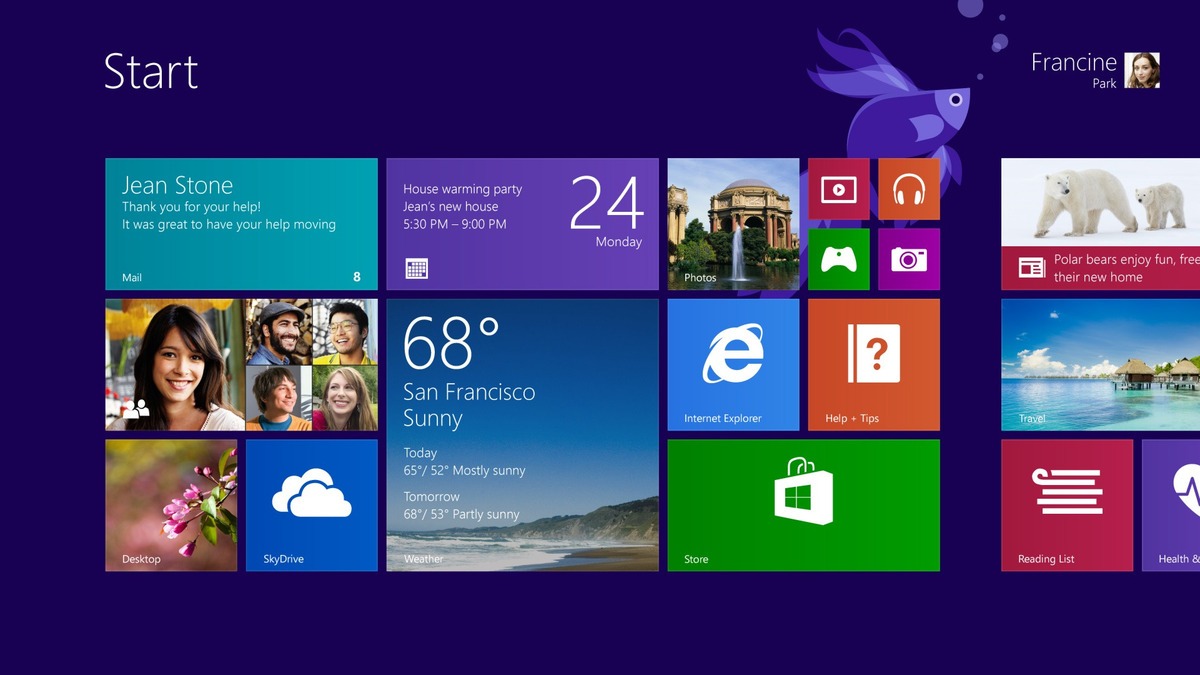 The small-screen support had been previously announced, and Microsoft says the update will be available to all Windows 8 devices before the end of the year. It won’t cost Windows 8 users a dime, and the changes will apply to both Windows 8 and Windows RT devices.

We met with Microsoft to go over the changes in detail. Although there wasn’t time to go over everything that will be new in Windows 8.1, they took us through all the major upgrades in Windows 8.1.

Start Button Returns: Perhaps the biggest change, at least philosophically, is the return of the Start button in the desktop environment. Windows 8 famously killed off the Start button when it built the new operating system around the Start screen, which is basically a supercharged Start menu with a touch-first user interface. Users protested, though, and Microsoft has brought the button back in Windows 8.1, although it’s simply a visual cue for how to get back to the Start screen.

In addition to the button, users will also be able to set the All Apps screen — which lists all apps installed on the PC — as the default instead of the Start screen, which may appeal to some people who miss the old pop-up Start menu.

New Live Tile Sizes: Windows 8.1 will offer users both an extra-small and extra-large size for live tiles (see below). The extra-large size is intended for apps that a user opens the most, or simply wants to see more information on the tile. For example, the weather app will show more forecast data in the extra-large size, which takes up the same room as two large tiles.

Microsoft expects power users will like the tiny live tile. It allows users to fit four app icons in the same space where there used to be just one. Since Windows 8 doesn’t have “folders” for the Start screen, the extra-small tile is a decent substitute.

Downloaded Apps No Longer Pin to Start: In Windows 8, apps automatically pin themselves to the Start screen. In Windows 8.1, that will no longer happen, which will theoretically lead to a neater Start screen for most users. Microsoft said the automatic pinning often led to a morass of downloaded-and-forgotten apps populating the center of many users’ Start screens.

All Apps Gesture: Going hand-in-hand with the “no pinning” change, there’s now a fast way to see the All Apps screen — just swipe up. From there, it’s easy to find an app and pin it with new sorting tools that let you list apps by name, category or most recently downloaded.

Auto Updates: No more manual app updates! With Windows 8.1, all your apps will simply update themselves in the middle of the night when downloads are available.

Boot to Desktop: In Windows 8.1, users will now be able to change settings to save them the single click they needed to perform in Windows 8 to take them to the desktop environment.

More Colors, More Textures: Whereas Windows 8 gave the user a very limited selection of color themes, Windows 8.1 allows a much wider variety of options. There are many more textures, too.

Desktop Background Image on Start: The Start screen in Windows 8.1 can now mirror the background image from the desktop environment, which should help reassure some users that the new UI isn’t an alien world that’s completely separate from the desktop.

Global Search: Microsoft has greatly enhanced the device’s built-in search, one of the most-used functions in the Charms menu. In Windows 8.1, it’ll function more like an omnibox, incorporating apps, documents as well as web content in results.

Press enter, and those results are rendered as a search “Hero” — essentially an app that sorts the results in a way that’s visual and easy to navigate. Search heroes replace the Bing app.

Snap Upgrade: Snap is what allows two apps to run on the screen at the same time, with one of the apps off to the side in a window that takes up 25% of the display. That percentage is much more flexible in Windows 8.1 (see below), letting users split the screen up any number of ways — 50/50, 60/40, 70/30, or anything in between.

You can Snap more than two apps at once, too. There’s technically no maximum number — it’s only limited by the resolution of your display, since Microsoft doesn’t require developers to support their apps in windows less than 500 pixels wide. For a high-res monitor, that could mean four or five apps running simultaneously. 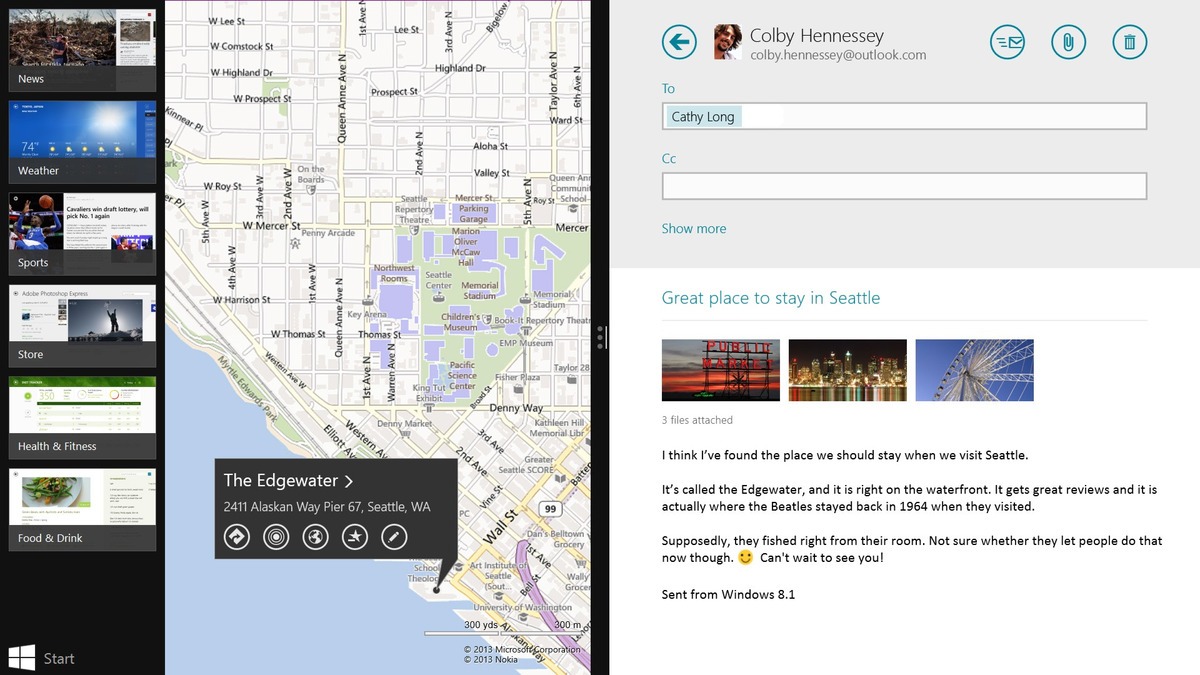 Better Multi-Monitor Support: A new Settings app, with moves several functions from the desktop to the modern UI, includes more options for multi-monitor setups and allowing users to set the resolution of secondary monitors manually if they wish.

IE Improvements: IE in Windows 8.1 supports unlimited tabs. Also, your open tabs will sync across devices, and you can make live tiles out of websites — real live tiles, with updating content — as long as the developer has included them.

Active Lock Screen: The lock screen supports an intelligent slide show that can do things like display photos from exactly a year ago. You’ll also be able to take a Skype call without unlocking the device.

App Syncing Across Devices: When you log into a second Windows 8.1 device, the same apps you have on your first one will automatically download and sync. Similar to iOS, you’ll be able to opt individual apps and devices out of syncing.

Deeper SkyDrive Integration: SkyDrive becomes the default for saving all documents. Any and all files stored in SkyDrive can be made available offline by mirroring the content to your PC.

New Microsoft Apps: Windows 8.1 introduces new Microsoft apps including a Calculator, and Alarm, Food & Drink (which has a nifty hands-free recipe mode that lets you wave your hand to advance to the next step) and Health & Fitness (with a WebMD-esque symptom tracker).

Users new to Windows 8 will probably get a lot of use out of Help & Tips, which will help walk them through the finer details of the modern UI.

Apps Enhancements: The Xbox-branded apps for Music, Video and Games all introduce new features that bring you to the content you interact with the most. News and Sports have similar enhancements, including customized sections and making stories and stats on your favorite teams more prominent.

Microsoft admits it missed the boat on small-screen tablets, which have exploded in the last two years. With Windows 8, a raft of technical issues stood in the way of manufacturers building Windows tablets in the 7- to 8-inch range.

Those issues have been addressed in Windows 8.1, paving the way for a new generation of Windows tablets to compete directly with the likes of the iPad mini and Kindle Fire HD. One of the first such tablets, the Acer Iconia W3-810, leaked on Amazon a few weeks ago.

Are you happy with the new features in Windows 8.1? What else would you like to see added to the list? Share your thoughts in the comments.