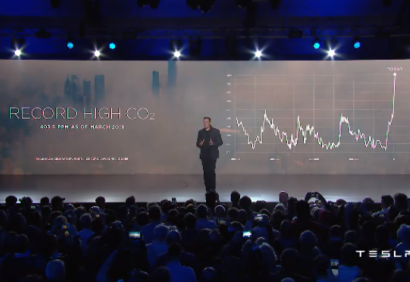 Tesla CEO Elon Musk has been selected to be an economic advisor to President-elect Donald Trump. Travis Kalanick, the CEO of Uber, and Indra Nooyi, chairwoman and CEO of PepsiCo, were also picked to join the policy team.

“America has the most innovative and vibrant companies in the world, and the pioneering CEOs joining this Forum today are at the top of their fields,” Trump said in a statement announcing Musk and the other new team members. “My administration is going to work together with the private sector to improve the business climate and make it attractive for firms to create new jobs across the United States from Silicon Valley to the heartland.”

Several companies represented at the forum are active participants in the clean energy sector as major renewable energy purchasers, or through the cleantech products and services they offer, or both. On Wednesday, Trump and his team met with the heads of leading tech companies, several of which have committed to powering 100 percent of their operations with renewable energy, including Google, Apple and Facebook.

Tesla, however, holds the highest cleantech credentials among them. Musk built the electric vehicle (EV) company to address carbon emissions as part of its core mission. In his “Master Plan, Part Deux,” Musk wrote that “we must at some point achieve a sustainable energy economy or we will run out of fossil fuels to burn and civilization will collapse.” Spearheading the green economy with a set of widely compelling products has been one of Musk’s central aims.

Over the past year-and-a-half, as the presidential campaigns raged, Tesla evolved from an EV-maker into multi-faceted sustainable energy company with the launch of Tesla’s battery business and the recent acquisition of the SolarCity, the nation’s leading rooftop solar installer. Musk said little about his political views during the election, although he donated to Hillary Clinton’s campaign and eventually expressed doubts about Trump and his pro-fossil fuel platform. In a November 4 interview with CNBC Musk said, “I feel a bit stronger that he is not the right guy.”

Now that Trump has been elected and Musk has his ear, what will the cleantech champion say?

It’s unclear what exactly Musk and other industry leaders have discussed with Trump so far, but many Americans are hoping that climate change is somewhere on the agenda. Trump has called climate change a hoax and continues to doubt the science, which has created concern for environmentalists, clean energy groups and other countries that have vowed to take climate action. In hopes of changing Trump’s view, more than 10,000 people signed a Change.org petition asking Musk to give the president-elect a climate change lecture. In his new advisory role, it’s possible something like that could happen.

Musk wasn’t brought on to talk about climate science, though. Because the Strategic and Policy forum is intended to focus on economic issues, discussions are likely to center on specific policy actions the federal government can take to grow businesses and create jobs.

To that end, Musk could go to bat for the continuation of federal incentives for renewables. Last December, Congress passed a bipartisan bill extending the Investment Tax Credit (ITC) for solar and Production Tax Credit (PTC) for wind through 2020. With support from both parties, it’s unlikely the credits will be be repealed before they’re scheduled to sunset, but not impossible. Depending on Trump’s priorities, the incentives could be cut early as part of a larger tax plan backed by Republicans in Congress. Musk, whose businesses benefit directly from the ITC, could help keep renewable energy tax credits off of the chopping block.

EV credits are another policy issue Musk could take on. Given Trump’s views on climate, cleantech advocates are concerned he will ease fuel economy regulations on automakers and pressure California to abandon its zero emissions vehicle (ZEV) mandate, which could dampen the overall EV market. Musk’s views on ZEV are murky. Last quarter, Tesla made $139 million from selling ZEV credits to other automakers. Yet Musk has said that eliminating the program would actually make Tesla more competitive, because an oversupply of credits has reduced the potential to earn money from them.

“The incentives either don’t scale or are disadvantageous,” Musk said on a recent earnings call, when asked if a Trump presidency would hurt his EV business. While he downplayed the significance, it’s in Musk’s interest to defend clean vehicle mandates as long as Tesla can benefit from them, and it’s in the interest of reducing emissions that they remain in place.

It would also be advantageous for Tesla to have Trump promote extending the $7,500 federal tax credit for EVs. Currently, the credit is set to phase out once an automaker sells 200,000 EV units. Because of that limit, most people who have pre-ordered a Tesla Model 3 won’t get the tax break.

The Trump administration is not a fan of hand-outs, but Musk could make a compelling case for extending the $7,500 EV credit based on cutting foreign oil dependence. Then again, with strong pro-oil views among many of Trump’s top agency picks and Republicans in Congress, that attempt may be futile.

Where Musk could be most effective as a Trump advisor is in advocating for continued investments in cleantech research and development at the Department of Energy. Among many other things, the DOE has played an instrumental role in bringing down the cost of lithium ion batteries and helping to develop the next generation of battery technologies. Companies like Tesla stand to benefit from government-led innovation and government-trained talent pool.

However, it’s unclear what kind of policy advice Musk’s “go-it-alone” attitude will translate into. Tesla’s leadership frequently touts the company’s abilities, like cutting battery costs faster than projections. So it’s possible that Musk will argue that entrepreneurship is the true source of innovation, not the state.

Also, while Tesla benefited from a $465 million DOE loan, Musk has played down its significance. After the loan was paid off (nine years early) Musk said that a carbon tax would be better than a government loan program. “Yes, am arguing against subsidies and in favor of a tax on the end bad created. Market will then achieve best solution,” he tweeted.

If Musk could actually convince Trump to propose a carbon tax that would come as a shock and a delight to many, but that seems unlikely. If Musk decided not to advocate for DOE’s cleantech investments because he thinks they’ve had a limited impact on Tesla’s success that seems shortsighted.

According to an internal memo sent to the DOE by Trump’s transition team, the new administration plans to take a close look at the government’s loan programs. While Republicans frequently point to Solyndra’s failure — Trump himself called it a “disaster” — the loan program has a loss ratio of just 2.33 percent and has been instrumental in making clean energy solutions more competitive. Many energy and technology experts view continued investments through the DOE loan office and through other vehicles like ARPA-E as critical to advancing the clean energy sector and boosting U.S. economic competitiveness overall. On this issue, the cleantech community is surely looking at Musk as an ally.

Of course, even if Musk tells Trump that leading on climate and clean energy is in America’s best interest, there’s a chance the next president just won’t listen. At the end of the day, Musk holds an advisory role. Meanwhile, Trump has given top positions in his administration to people with strong ties to traditional energy industries.

“We want you to keep going with the incredible innovation,” Trump told Musk and other tech leaders on Wednesday, according to Newsweek. Time will tell what that means for sustainable energy companies.