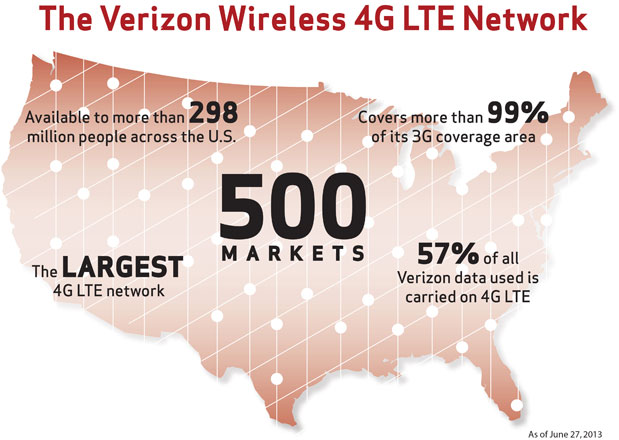 Verizon was the first US carrier to launch (and famously fumble) its LTE rollout back in 2010, but its long road to 4G nationwide coverage has finally come to a near close. As of today, the operator’s LTE footprint now blankets more than 298 million people in 500 markets across the US, with Parkersburg, West Virginia claiming that 500th market distinction. It’s a milestone Verizon managed to achieve in a little over two years’ time, as the company’s Chief Network Officer Nicola Palmer was quick to point out. The completion of this initial LTE rollout also brings Alaska into Verizon’s coverage map as early as next month — a territory that, before today, didn’t even have 3G — marking the carrier’s network as available in all 50 states.

With a full LTE expansion, however, comes network congestion problems, as subscribers in major cities like New York are already starting to experience. Palmer assured us that solutions are currently underway to shore up capacity in these LTE markets. Verizon’s AWS holdings, in particular, should serve to augment LTE reception in select areas starting in the second half of this year. The same goes for small cell site deployment, which Palmer stressed is an LTE-only initiative. News on the carrier’s plans for LTE-Advanced remain just as vague as ever, with Palmer positioning the standard as yet another tool to enhance current LTE capacity. Unfortunately, she wouldn’t commit to a timeframe for LTE-A nor address concerns about the potential for new pricing tiers when it does eventually launch. Still, Verizon subs will at least have VoLTE (voice over LTE) to look forward to next year — that is, when it eventually clears the company’s rigorous lab and field testing.