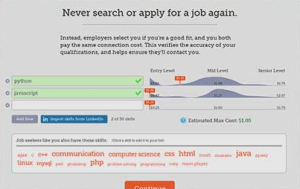 With the war for talent alive and well and jobs sites continuing to leave more than a little to be desired, San Francisco-based Venturocket is announcing today that it has raised $700K in Series A financing for its unique spin on matching job seekers with the most relevant opportunities. The round was led by Runa Capital, with contributions from Talent Equity Ventures, an affiliate of Ward Howell, and AnchorFree co-founder and CEO, David Gorodyansky. In turn, the startup also said that it will be adding former BranchOut executive Michael DeVerna to its advisory board.

Instead of offering the same old model of applying for jobs, the startup wants to be a “talent discovery platform,” eschewing posting fees, premium accounts and subscriptions for what Venturocket founder Marc Hoag calls a “market-based” approach to matching job seekers to the right employer.

In other words, rather than casting the net wide and applying to every job post they can find, Venturocket is attempting to create a more accurate way for job seekers to self-evaluate and for employers to determine value. The less noise and the less spam the better.

The model may seem a bit confusing to those used to the traditional approach to job boards, à la Monster.com or Indeed.com, but it’s actually fairly simple. Allowing everyone on the planet to apply for jobs and connect with employers for free is great in principle, but it doesn’t exactly help employers find the best talent, nor does it help solve the noise pollution.

So, Venturocket proposes a model in which job seekers fill out their profiles on the site, claiming tags and levels of skill and view matches based on those skills. Employers can also peruse those candidates and then reach out to those they’re interested in, but the kicker is that each side only pays to use the platform (and for those matches), once they’re made.

Typically, this “validation cost,” as Hoag calls it, is just a few dollars and is “equal to the market value” of those matching skills and experiences. If no match is made, then neither side pays. Hoag believes that this model is more fair to employers especially and more reflective of how things actually work today in recruiting. The industry is moving towards easier ways to recruit passive job seekers and away from blanket emails and spam — as it should. Hoag believes that, alongside tools like Entelo, Venturocket can help push things in the right direction.

The other potentially appealing part of the startup’s model is that people don’t actually increase their visibility by artificially padding their skills or resumes. Hoag believes that, in comparison to LinkedIn which “shamelessly promotes wealthier job seekers to the top of applicant piles without necessarily producing any good leads,” the pay-per-connection model can be a welcome alternative.

For now, Venturocket is focusing on technical talent and placing candidates at positions in the Bay Area (particularly at startups), but Hoag hopes to expand the platform’s scope quickly going forward. The platform is now open to startups and bigger companies, and more than 600 companies are already represented in its marketplace.