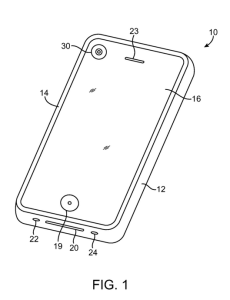 Apple appears to have renewed interest in investigating gaze detection similar to what Samsung offers as “Smart Stay” tech on the Galaxy S3 and Galaxy S4, which can stop a screen from dimming and going to sleep when a user is actively watching it. A new patent application (via Unwired View) describes Apple’s version, which uses the front-facing camera along with the onboard accelerometer to auto-switch between a predetermined screen power down time and making sure the display stays on for reading.

The system works by using the accelerometer to detect whether the device is being held still, and then by using the on-board front-facing camera to check whether a user is also actively looking at the screen. The accelerometer piece can prevent unnecessary use of the camera component, by stopping the camera from activating at all, which is key in terms of making the feature both battery efficient and effective.

Apple has filed this application as of January 25, 2013, but it’s actually an updated version of one filed back in 2008. It doesn’t describe some of the more advanced features that Samsung included with its Galaxy S4, including eye scrolling and a feature that pauses video when a user looks away from the screen. But it does lay the groundwork for future functionality controlled by a smartphone user’s gaze, and provides an intuitive method for incorporating facial feature recognition into a future version of iOS or the iPhone in a practical way.

The big benefit here is indicative of the different ways Apple and Samsung are thinking about similar kinds of tech; the whole point is to eliminate one more settings a user has to worry about, by handling power conservation techniques in a completely automatic way, instead of via manual input (currently, a user selects from a variety of screen sleep time options). The renewed interest in the patent could indicate that Apple is building this into something like iOS 7, but it could also just mean that it’s refreshing its patent suite for fresh legal attacks on its rivals. Still, this is one invention that would provide an elegant and useful UX update to iOS devices.