Facebook Will Let You Save Links to Read Later
Wedo Raises £3 Million Led By MMC Ventures. Because Furniture. 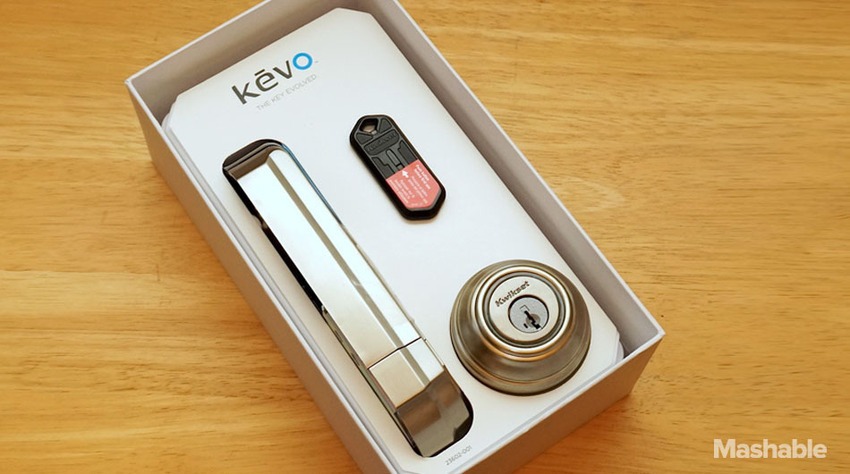 Secure keyless entry to your home via smartphone would make life significantly easier in any number of instances: arms full of groceries, or a guest who needs to get in without keys, to name a few. Several companies have developed smartphone-controllable deadbolts, with the development of Bluetooth LE (low energy).

One of the first of these smart locks to hit the market is the UniKey Kevo lock from Kwikset ($219), available in polished brass, satin nickel and Venetian (dark) bronze from Amazon, Brookstone, Build.com, Home Depot, Lowe’s and Newegg.

Kevo adds an extra twist to smartphone control: it’s touch sensitive. Tap once to unlock it; tap it twice to lock.

Locking and unlocking your deadbolt simply by touching it is kind of 21st century cool and, maybe by the next decade, 21st century normal. With some cars having already gone keyless, maybe door keys will soon join the likes of rotary phones and vinyl records. 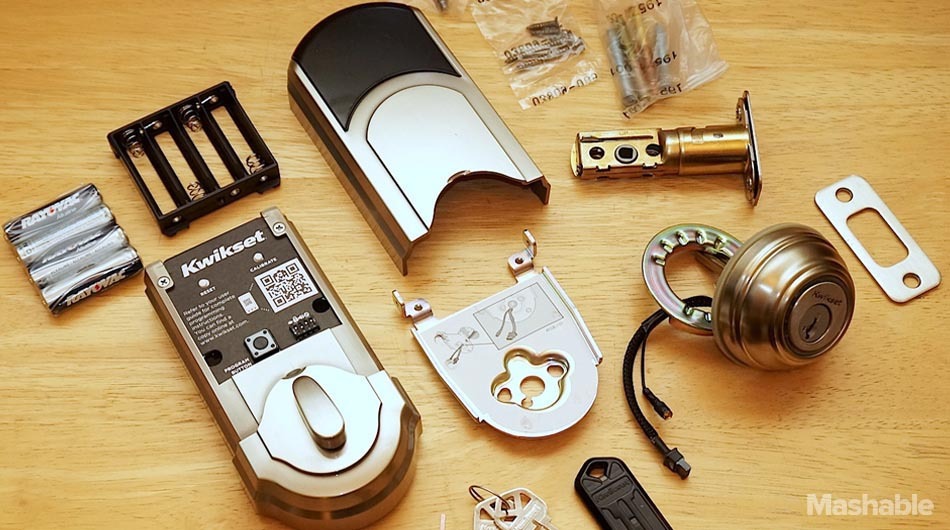 With the included fob or free Kevo iPhone app (no Android version is available) nearby, just touch the lock to bolt or unbolt it. You don’t need to have your phone out or the app open.

As a backup, you also get a normal key; other than the Bluetooth and touch-sensitivity, Kevo is a standard Kwikset deadbolt lock. Kevo operates on four AA batteries, which will last about a year of normal touch operation.

But Kevo is more than a touch lock. You can also send “eKeys” to whomever needs to get into your place. You email an eKey to someone, who then downloads the Kevo app to their iPhone to accept the key.

You also can get notifications, such as eKey acceptance, low battery alert and software updates.

Installing Kevo is neither as complicated as all the parts in the photo might make it seem, nor as easy as I’d like.

If you have a standard deadbolt lock, the kind where the bolt goes into the door jamb, it’s a simple replacement job. Kevo installs nearly the same way; taking apart the old lock will inform your installing the new one.

For everyone else — unless you’re Bob Vila — call a locksmith, the neighbor with a full Black & Decker set or your super.

In all events, there are a few installation wrinkles. Two wires have to be connected within the mechanism, and you have to explicitly follow the directions when installing the battery pack.

If you have some lock installation experience, it shouldn’t take more than 10 to 15 minutes to install. 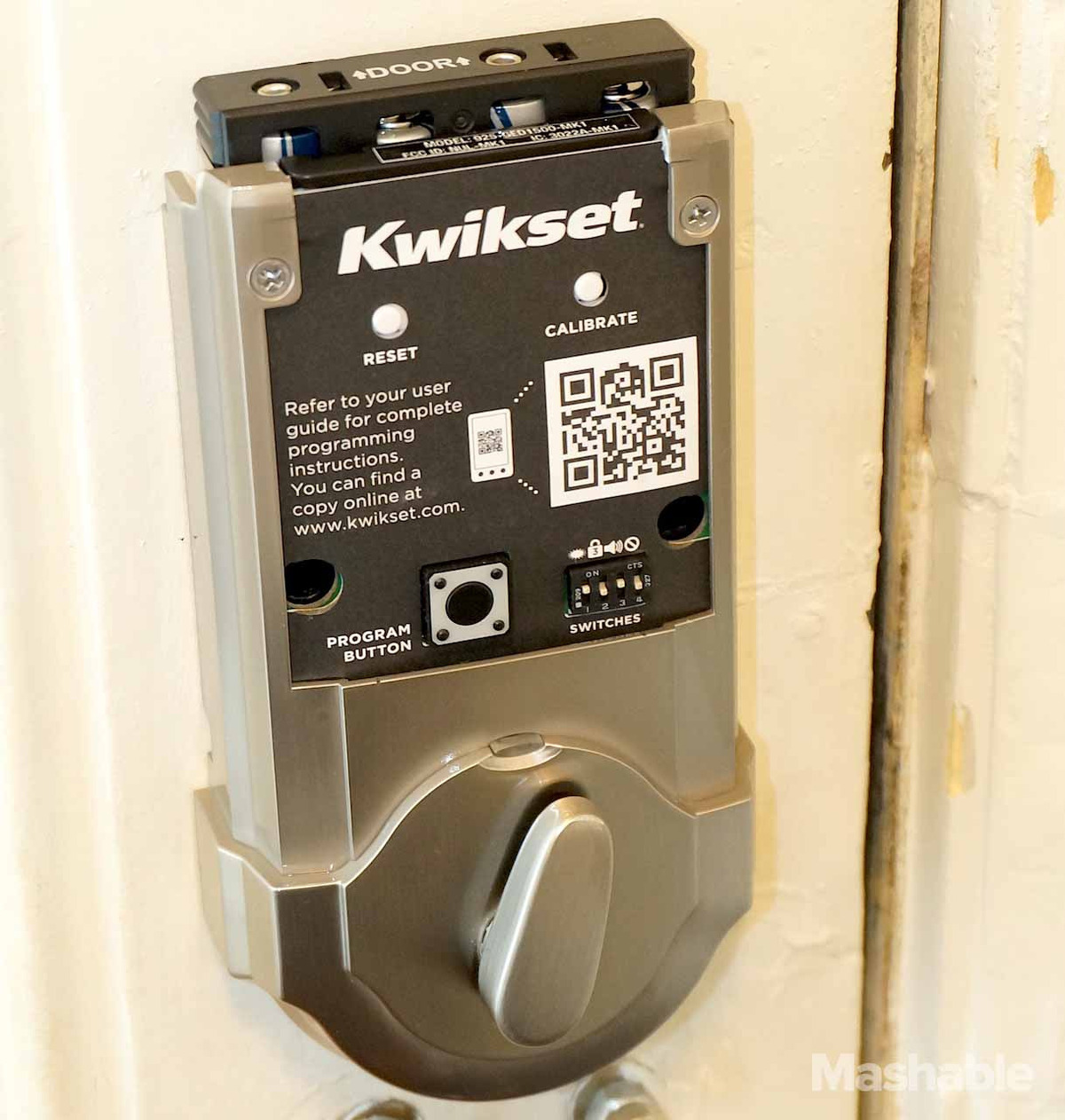 Calibrating the fob and the iPhone to the Kevo, and so both work only when you’re outside facing the door, can be time consuming. Remember, Kevo operates on proximity to the programmed Bluetooth key. You don’t want someone outside to be able to touch open the lock when you’re standing with the fob or your phone inside the door.

You then go outside and close the door and go through a touching procedure until the lock recognizes the fob and iPhone.

Each calibration process –- for the fob and for the iPhone -– is done separately, and each likely will need to be repeated several times. With the fob, it took me three tries. Calibrating my iPhone took an annoying eight tries. It took longer to calibrate the fob and the iPhone than the physical installation.

Once installed and calibrated, Kevo operated perfectly, if slowly.

First you have to securely register your Kevo account and eKey. You’re given a choice of up to three security questions (e.g. your oldest sibling’s birthday, your childhood phone number, etc.). You then have to name your key. This process also takes about 10 minutes.

When you touch the lock, it lights up with a blue circle. Kevo then takes three or four seconds to lock (the light turns green) or unlock (the light glows orange). That’s probably faster than the time it takes you to reach into a bag or pocket, pull out your keys, slip the key into the lock and turn it, then return the key to your pocket. But in this Bluetooth/smartphone/instant response age, that three or four seconds can seem long.

A triple tap locks the door if you don’t have a fob or iPhone. This is handy when a guest is leaving after you; they can now lock the door behind them without a key. But triple tap has to be enabled via switches on the rear of the mechanism.

You can hear the bolt operating, a good thing since you can’t feel it as you would when turning a key. It then beeps when it lights green or orange when the bolt operation is complete. Your iPhone also vibrates when the lock is activated.

Sending an eKey can be annoyingly involved for the recipient. Once the eKey invite is received, and the invite opened on the iPhone, the recipient has to download the Kevo app and go through the whole Kevo registration and security process you did.

An LED on the rear of the Kevo flashes red when the door is locked and green when it’s open. 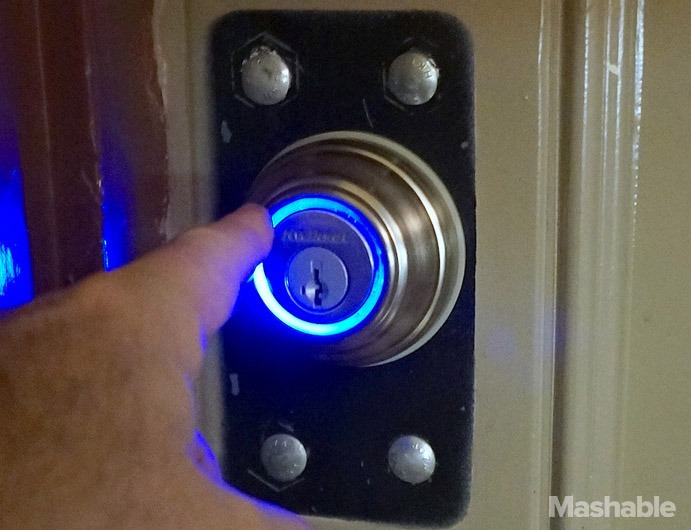 Kevo Could Take Cues From the Competition

My biggest concern with Kevo is proximity security. Kevo works on Bluetooth, which has a 30-foot range. This means someone could touch-open your door if you’re somewhere within this range. In my own informal tests, Kevo locked or unlocked when my iPhone was further than 20 feet away from the door.

What’s needed is some sort of user proximity settings, such as those offered on a Kevo competitor, Goji (which is not touch sensitive). You should be able to tell Kevo to work only if the fob or iPhone is within a specified distance of the lock.

I’d also feel more comfortable if the Kwikset lock opened with a more Medeco-like key rather than the easy to duplicate Kwikset key.

Much of the exterior of the Kevo lock looks metallic but a lot of it is plastic, understandable considering we’re dealing with radio waves. But too much of the Kevo housing on the back of the door feels cheap.

On the operational side, there are only two eKey choices: anytime and administrator. Time-limited, specific eKeys good for specific programmable times (such as from 2 p.m. to 4 p.m. every Tuesday), a feature also available on Goji, would be useful.

I also would love some remote key operation, also offered by Goji, but that’s more of a wish than a critique. You could add Lockitron to the Kevo to get remote operation. I assume some of these advanced customization features will be available at some point; one of the four switches on the back of the Kevo is labeled “Future Feature.”

These quibbles aside, Kevo performs as advertised and could represent the vanguard of all whole new door lock paradigm.

Send eKey to other people