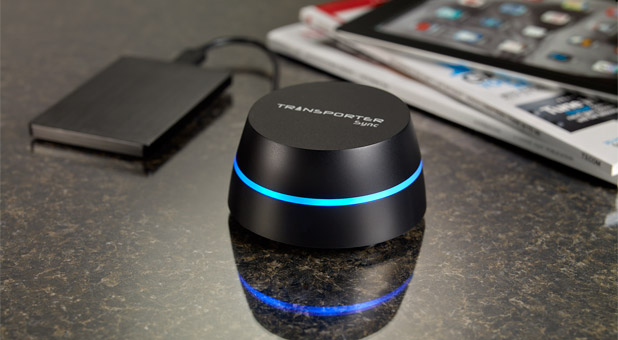 The folks at Connected Data made a splash back in May with Transporter v2.0, and they’ve just announced their second foray into the wonderful world of cloud storage with the Transporter Sync. Like its slightly larger predecessor, Sync offers Dropbox-like functionality without users having to shackle themselves to costly subscription fees. However, unlike its elder, which has a 2.5-inch drive inside, the Sync lets you use whatever external HDD you like, as long as it’s no larger than 4TB and connects via USB. This new Transporter option comes courtesy of consumer feedback: folks wanted to pay less, have more storage and be able to use their existing HDDs in their Transporter network. So, Connected Data set to work, swapping in a new chipset to facilitate connecting drives via USB, lopping off all the extraneous bits formerly needed to mount a drive in the device, and making the necessary firmware tweaks to make it work

As its name indicates, this compact storage unit synchronizes with a variety of devices, so you can transition between working on your computer, smartphone or tablet with the aid of the Transporter iOS and Android apps. What makes Transporter, old and new, stand out is an emphasis on privacy, a word that’s become all the rage in an increasingly wary consumer market. All of your data is saved locally, and by circumventing the need for a public cloud, the company claims that your precious files are as safe as houses. Sync will be available for $99 in the US or £89 in the UK in the next few weeks.