Motorola’s new Droid trio for 2013 — the big-screen Ultra, the battery-packing Maxx and the oh-so-cute Mini — includes an interesting and kind of strange way of sharing photos. Droid Zap is an attempt to make photo sharing mind-bogglingly simple: a single swipe is all you need.

I had a little hands-on time with the new Droids, which will be exclusive to Verizon, and the Droid Zap is as convenient as it’s made out to be. Even Apple’s AirDrop, an iOS 7 feature that allows sharing to iPhone owners close to you via Wi-Fi direct, has more steps than Motorola’s new trick.

Once Droid Zap is enabled, all you have to do is swipe up on a photo with two fingers. That’s it. Done. No names, no email addresses, no social networks necessary.

That sounds kind of bizarre, but it’s true. What happens after you swipe is that the phone uploads the photo to a kind of temporary cloud (remember, Motorola is owned by Google), which is tied to the phone’s location. The photo stays in the cloud for two minutes and then poof, it’s gone.

Before it disappears, anyone within 300 feet of your phone will get notified that there’s a photo available for sharing. Well, anyone with one of the new Droids or running the Droid Zap Android app, which Motorola says will be available when the new phones launch on Aug. 20 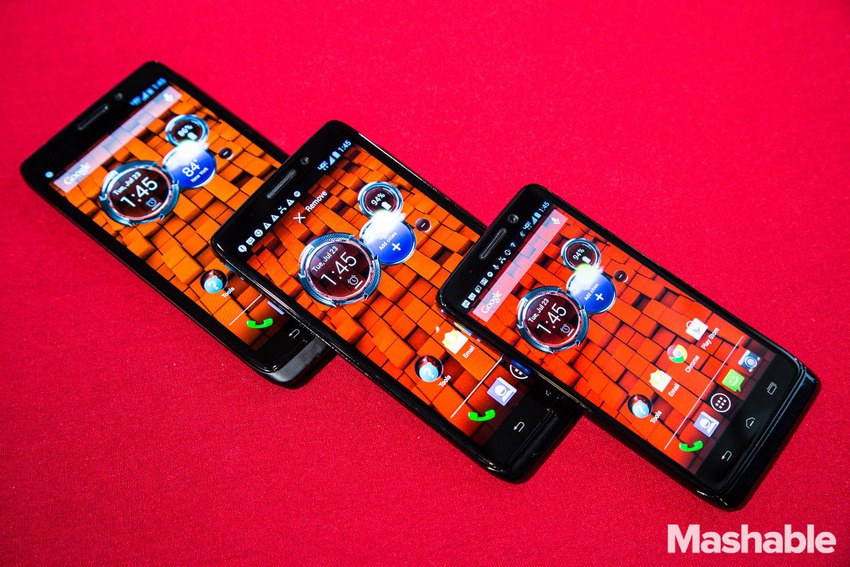 The limits on proximity and duration are the main security features, but if you’re still worried about creepers, you can add a randomized code to the photos you share, although relaying the code to your recipient obviously adds another step. If you don’t use codes, though, Droid Zap probably isn’t a good idea for sensitive photos. If you want more assurance about who’s seeing your pics, you can always use a more traditional sharing method (or Snapchat).
Always Listening

Another interesting differentiator in the new Droids is their ability to become active from voice alone. You don’t need to push a button, shake it, or anything else. The user just needs to say the words “Okay, Google Now,” and the phone will immediately launch that app. You can ask it the weather, what’s going on in your calendar, of just perform a simple search.

How can a phone always be listening, even when in power-save mode, and not run down the battery? That’s one of the secrets to Motorola’s X8 processor architecture: There’s a dedicated low-power core that is tasked with listening for the user to utter the phrase. The main processor is never activated, so the feature’s power drain is miniscule.

Touchless control requires the user to record a voice sample, which ensures no one else can “Droid bomb” your phone by speaking the same phrase.

Another battery-saving feature is the way the new Droids handle notifications. They appear on the lock screen and fade briefly, and the user can dismiss or deal with them without unlocking that phone. For the Ultra and Maxx phones, which use Super AMOLED screens, only the pixels needed are lit for the notifications, so the battery is taxed to the absolute minimum.
Droid Details

The three phones all feel good in the hand, and credit to Motorola for not cheaping out on the specs of the Droid Mini — it has the same processor and screen resolution as the other two (although its display is an LCD, not Super AMOLED). On the larger Ultra and Maxx, the red design is glossy, while the gray is “matte,” but both feel equally grippy.

I checked out performance by loading a few graphical websites on Chrome (including Mashable), and I was impressed with how quickly photos loaded and the speed at which it responded to things like everscroll. General navigation was good, too. The burst mode aside, I’ve seen faster photo-taking on other Android phones, but it wasn’t a disaster.

Overall, Motorola’s new Droids appear to be very capable phones, and they have some intriguing differentiators. Are they enough to take some mind share back from the Samsung Galaxy line? Probably not, especially since they’re Verizon-only, but they’ve nicely set the stage for company’s true flagship, the Moto X.