Mountain Lion Macs will run Mavericks — report
How To Make More Money As A Freelancer (The Answer Might Surprise You).

Call it the era of the extroverted computer.

In the old days of personal computing, expansion meant using vacancies inside a computer chassis where you could plug in graphics cards and hard drives. But now, because of Apple’s fondness for Intel’s high-speed Thunderbolt data port, expansion means hooking up devices outside the chassis.

Connecting external devices has long been just about the only way to bring new hardware to laptops. But at its WWDC 2013 show on Monday, Apple showed that the sealed-box philosophy of the laptop is coming even to Apple’s highest-end, most expandable machine, the Mac Pro.

Today’s Mac Pro is a large rectangular box — granted, a more elegant box than most Windows tower PCs and workstations, but a box nonetheless. When the new Mac Pro arrives later this year, though, customers will get a compact cylinder that’s one-eighth the volume of the existing machine.

From a hardware engineering perspective, the new Mac Pro is quite an architectural departure.

Instead of empty PCI Express slots and vacant hard drive bays, the new Mac Pro will come with six 20Gbps Thunderbolt 2 ports powered by three controllers separate controllers. Each port accommodates a daisy-chained collection of up to six devices such as storage arrays, 4K monitors, and video-capture devices.

Oh, and it’s got four USB 3 ports, too. Those may not be as glamorous, especially since they won’t be the double-speed USB 3 ports due to arrive in 2014, but they’ll still be workhorses for more mainstream devices such as flatbed scanners and backup drives.

The new Mac Pro is a machine that’s geared for video editing, photo compositing, software development, computer-aided design, and other 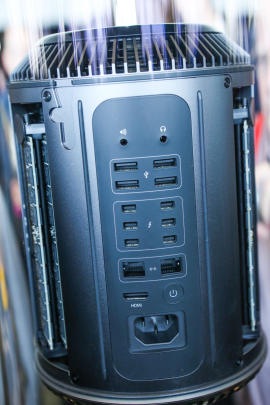 high-end computing chores where fast processors and copious amounts of memory are worth the extra cost. It’s aimed squarely at the creative pros who once were the mainstay of Apple’s business but who have suffered now that Apple has turned so much of its attention to its highly profitable horde of iPhone and iPad customers.

Two other departures from conventional architecture struck me, too:

• The new Mac Pro has a “unified thermal core,” that distributes heat load more evenly across the entire system rather than concentrating it in the CPU and GPU hot spots. It uses a bottom-to-top airflow rather than the traditional front-to-back design to bring in cool air. That’s smart, given that heat rises, but for those who park their machines under a desk, I hope that airflow won’t turn the machine a dust bunny harvester.

• The machine will come with an SSD, but it’ll be connected in a different way from what’s common on today’s PCs. Instead of using the SATA interface designed for hard drives, it’ll be one step closer to the action by connecting directly to the PCIe interface.

The machine will have a single processor, but it’ll be a doozy — an Intel Xeon E5 model with up to 12 processing cores.

Creating such a Thunderbolt-centric architecture is a mixed blessing for Mac Pro’s customers. On the plus side, they don’t have to pay for the extra sheet metal of a larger Mac Pro. And the compact canister-shaped design will fit more easily on top of desks instead of under them for easier access to all those ports.

But for customers who need to plug in lots of peripherals, the new Mac Pro will rapidly lose its sleekness. DVD drives, scratch disks for photo editing, backup disks, and storage arrays for fast access to heavyweight video projects are going to pile up in a jumble of mismatched electronics.

Moving expansion outside the system has been a steady trend for the Mac line. Though in the 1980s the Macintosh II introduced internal expansion ports to the family, Apple more often has eschewed the approach. It’s no coincidence that Apple adopted the SCSI interconnect for daisy-chaining peripherals in the 1980s and 1990s later pushed ahead with FireWire, aka IEEE 1394.

So, although the new Mac Pro may look different, it’s actually more of a return to Apple values than a departure. 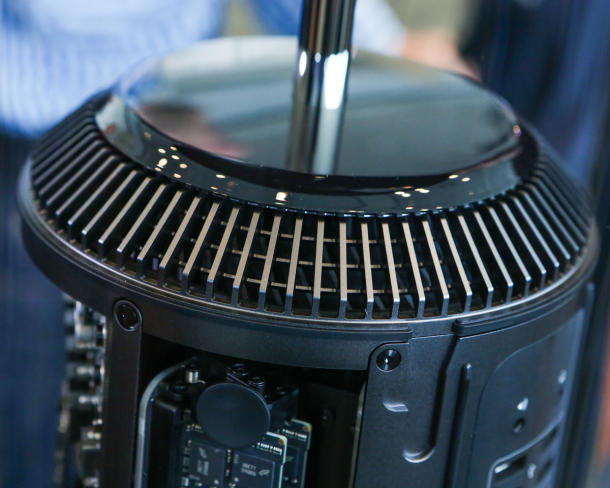 The new Mac Pro uses a bottom-to-top airflow, a design that means vents are in a ring around the top.
(Credit: James Martin/CNET)