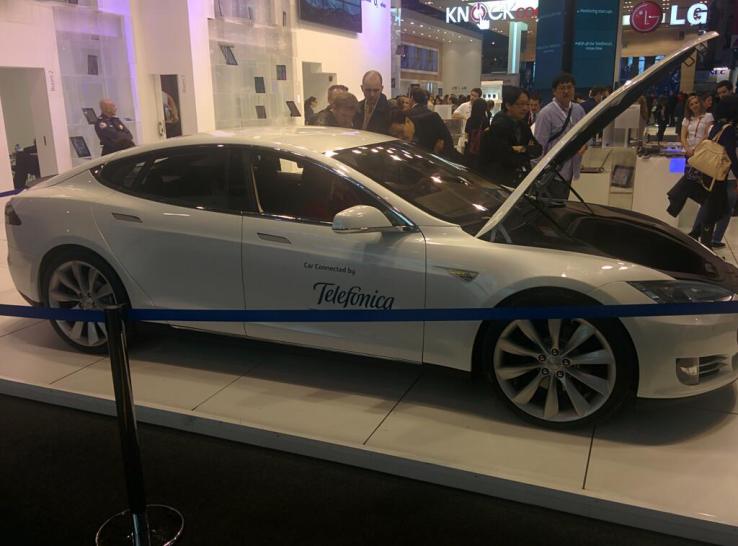 Those with a sharp eye who visited the Geneva motor show or who own a Model S in Europe may have already noticed a connection between Telefonica and Tesla by way of the “car connected by Telefonica” signs on the sides of cars, or through the in-car navigation system that played Spanish ads. Now the two are making it official: Telefonica says that it will be providing the wireless connectivity for Tesla cars across the UK, Germany, Netherlands and Spain, covering telematics and infotainment services.

This is not the first carrier deal for Tesla in Europe; in November 2013 it announced a deal with Telia Sonera for the carrier to power in-car systems in Sweden, Denmark, Finland, Estonia and Latvia.

But Telefonica tells me it is likely the biggest in terms of geographical footprint and customers: Tesla paid Telefonica “millions” to seal the deal, a spokesperson tells me.

It follows another, similar carrier deal Tesla inked with AT&T in January of this year.

In terms of how it will work for users, it is not unlike Amazon’s Kindle service: users get a wireless connection as part of their purchase of the item (in this case a car), without having to sign a separate contract for that connection. The service is powered by Jasper and will provide the Internet connectivity for various in-car “infotainment” and telematics, including navigation, streamed music, Internet browsing and remote vehicle diagnostics.

For Telefonica, a deal with an aspirational brand that epitomizes forward-thinking innovation is a big win at a time when it continues to try to position itself not as a stuffy old carrier, but a forward-thinking technology company in its own right. It comes at a challenging time, about a month after Telefonica scrapped a standalone division called Telefonica Digital, reintegrating those services back into the main company.

“As we accelerate our transformation into a digital telco we see lots of opportunities to empower consumers,” Jose Luis Gamo, CEO at Telefonica Multinational Solutions, said in a statement. “Connected cars that provide drivers with more information and a better and safer driving experience is a perfect example of this. Tesla is one of the world’s most forward thinking and exciting businesses. We share their passion for innovation and are thrilled to be working with them to deliver a superb connected in-car experience to Tesla drivers across Europe.”

Connected cars are still a relatively small part of the bigger automotive picture — and Tesla even more niche — but their numbers are only growing at the moment. Telefonica estimates that connected cars account for 10 percent of all cars on the market, but that number will grow to 90 percent by 2020.