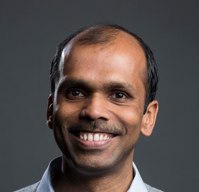 While Square has seen several top senior people leave over the last year, it’s also making up for them with some notable hires.

Today Gokul Rajaram, dubbed the “Godfather of AdSense,” is joining Square from Facebook, where he was the product director of ads. At Facebook, he oversaw the company’s aggressive monetization push over the past year, including incorporating better ad units on mobile devices.

The company says he’ll oversee Square Register, the point-of-sale system that the startup designed for small and medium businesses to use from tablets and smartphones.

“I’ve been fortunate to work for two mission-driven, world-changing companies, and Square’s vision and passion for helping businesses grow is inspiring,” Rajaram said in a statement.

He joined Facebook through the sale of his startup Chai Labs to the social network back in August 2010. Before that, he also was a key leader in developing Google’s AdSense network.

While Square has lost recent executives like COO Keith Rabois and other senior people like Jared Fliesler to the world of venture capital, Rajaram is a win for the company as it figures out its strategy going forward. The company picked up Francoise Brougher from Google as Business Lead in April. It also hired former U.S. trade representative Demetrios J. Marantis as head of international government, regulatory and policy work last month.