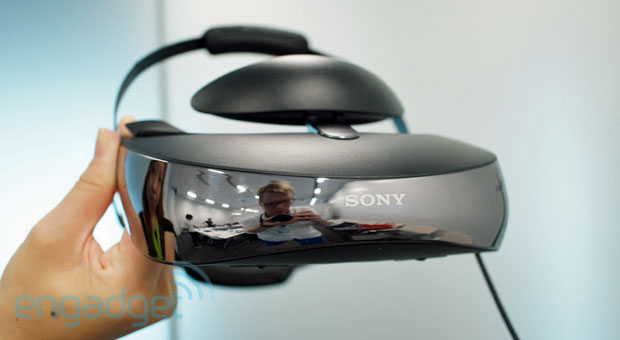 Ahead of Sony’s own IFA press event, it’s already announced its latest head-mounted display. The HMZ-T3 is the third iteration and while there’s no substitutional reality function (or camera), the company’s made some important improvements that could tip the balance for anyone concerned with sinking a substantial amount of cash for a one-person display. It’ll come in a new “wireless” iteration — we’ll explain why we used those quote marks a little later — while Sony has also improved the clarity of its dual OLED displays through lens and software adjustments (although the 720p resolution stays the same). There’s now a bigger viewing sweet spot and several new specialized screen options for gaming and movie-watching. Our favorite new feature, however, is the ability to plug in Android (presumably Xperia) devices with micro-HDMI / MHL connectivity. The device, via the battery pack, has ports for both full-size and micro-HMDI cables, and given the current influx of HD-capable smartphones (and content), it’s a pretty pervasive way to use it.

The HMZ-T3 also arrives with high-definition audio, virtualized 7.1 channel sound and has shed 10 grams since the T2. That’s despite improved padding and some more forgiving adjustment controls that made wearing the device noticeably less frustrating. Both wireless and wired options are set to go on sale in Japan this October and while a global roll-out isn’t yet confirmed, Sony’s told us that it’s certainly “in discussions” about further availability. We managed to get some early access to the wearable ahead of its reveal in Germany, so naturally, we played some games and watched some video. Our initial impressions and more details are right after the break. 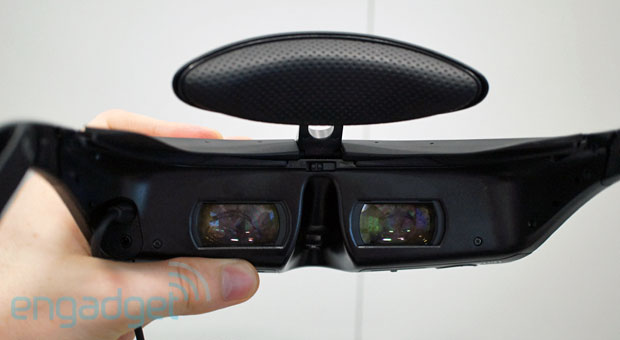 The gaming experience was pretty similar to what we saw on last year’s model, although there’s some new viewing menu options to increase the visibility of darker areas in-game without washing out the brighter parts. There’s also the ability to reduce the ‘size’ of the screen you’re viewing, down to 70 percent, if you’re finding the HMZ-T3 a little too immersive. Sony has also thrown in a new ‘screen’ mode for 2D content which offers a curved, movie theater-esque wraparound view. Video content was noticeably clearer and sharper than on its predecessors — colors were richer and the view didn’t have the same haze or blur we experienced on the T2 model. The separate processing unit (needed for the wireless function and linking to your PlayStation 3 or Blu-ray player), has been improved too, with the sensible inclusion of multiple HDMI input ports.

Sound-wise, Sony has added a new 32-bit DAC, and both sets arrive with some of the company’s better in-ear buds — MDR-XB90 headphones for the HMZ-T3W and MDR-EX300s buds for the wired HMZ-T3. These connect just below and to the left of the the eye-piece, which has been redesigned following feedback from last year’s model, with the display now now easier to focus on. There’s still a slider beneath each lens to adjust.

Further feedback has also resulted in Sony adjusting the headbands and rebalancing the weighting of the headset. The upper band is made of flexible plastic and you can adjust the length from either side. The front headrest has been further expanded, is now taller and can be folded away within the headset for storage — these changes were made to keep the HMZ-T3 securely on your head and increase the comfort during extended sessions, although we feel it’s still a little too heavy. There’s also a certain knack to getting it to fit on your head just right — once we had adjusted the headbands and placement, though, it felt pretty comfortable with or without glasses.

Now about that wireless model. While the headset’s new Wireless HD mode can stream content to the unit without any picture quality degradation up to seven meters away, the battery unit (which receives the signal) is still tethered to the headset. At least Sony has managed to slim the cable down since the last model and the aforementioned battery-pack (rated for up to 3 hours of use) is small enough to slip in a shirt or trouser pocket — it takes up around the same space as two smartphones, stacked.