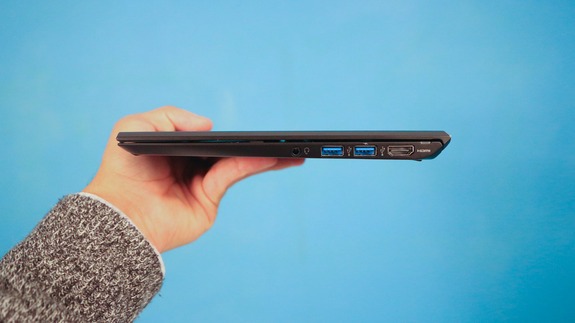 Tablets are great, but how productive can people really be with them? When it comes to getting things done, nothing beats a mouse and keyboard. The struggle to have it all in one device has led to hybrids like the Lenovo Yoga and productivity-focused tablets like the Surface Pro.

Those products have their individual merits, but they always force the user to make the PC equivalent of Sophie’s Choice: Do you sacrifice the keyboard for greater portability, or do you keep it and just accept your laptop will always be bulkier than a tablet?

Sony may have just spared us that terrible decision with the Vaio Pro 11. The Windows 8 PC weighs just 1.92 pounds, or about an ounce lighter than the Surface Pro tablet, and it measures just 0.68 of an inch at its thickest point. And yes, it’s a laptop. With touch.

How can this be? Sony built the Vaio Pro 11 partly out of carbon fiber to keep the weight down, but other than that it attributes the laptop’s featherlight status to “a passion for design.” That passion seems to acknowledge that battery life is an issue, since Sony’s product sheet says it’ll last “all day” only with an optional sheet battery.

Sony lent me one of its super-slim Vaios to check out. It has a few odd design choices — and that battery life is an issue — but I still came away blown over that such a little device can pack a huge PC punch. That’s partly because Sony sent over a machine configured with an Intel Core i7 chip rather than a less powerful i5.

It also had 4GB of RAM and a 256GB solid-state drive for storage. While the Vaio Pro 11 starts at $1,149, the configuration I had will put you considerably north of that.

It’s hard to use the Vaio Pro 11 and not constantly marvel at the overall design. Still, while Sony appears to have perfected compactness in the laptop form factor, it needs to work on some of its specific design choices.

The keyboard, for example, feels a little less polished than others. Although the chiclet-style keys look good and provide nice breathing room for the fingers, a couple of them were slightly misaligned on my unit (then again, it was a pre-production unit). Also, the keys have slightly too much “give” for an ideal typing experience — this isn’t exactly a MacBook Air.

On the plus side, the keyboard’s backlit, and the light is intelligent enough to turn itself off if you don’t touch the keyboard for too long. When you open the laptop, the hinge is built so the back of the keyboard is elevated slightly — a very smart decision.

The trackpad is nice and big, although otherwise it’s nothing to write home about. Here it feels like the pad actually has not enough give, and my presses sometimes threatened to topple the thing over if the laptop was resting in an irregular position. Still, it works fine.

The other touch interface — the screen — is beautiful: a full HD (1,920 x 1,080) display that’s enhanced with Sony’s Triluminous tech for better color, contrast and everything else that TVs have prioritized for years. It looks great, although for a touchscreen, I found it a tad “sticky” and sometimes hard to swipe on even if I was just a tad sweaty.

All my complaints so far are pretty minor, but I must say:

If there’s a dumb decision in the Pro 11 design, it’s the corners

If there’s a dumb decision in the Pro 11 design, it’s the corners. For some reason Sony designed the corners to be incredibly pointy. They’re not arrowheads, but they’re sharp enough that they do poke out noticeably, and bring new meaning to the term “hot corners.” God help the poor guy who drops this Vaio corner-first onto his foot.

I was able to forgive Sony its design sins, however, after using the Vaio Pro 11 for just a little while. Windows 8 boots up fast, but on this machine it’s like lightning. Apps launch quickly as well, and it responds fluidly to gestures and taps on the screen. Just as I’d expect from a high-end Ultrabook.

It doesn’t take much to coax the fans into turning on — fire up just a few apps, a high-res YouTube video, or start thinking about launching an app from Adobe, and sure enough that whirring will start. It’s not as loud as, say, a MacBook Pro, but it’s a near-constant presence.

What you’re looking at, though — especially if it’s video — will make you forget about the noise. Watching some movie trailers in 1080p on the Vaio Pro 11, I found the picture quality to have better contrast with lifelike motion and eye-popping color.

Sony attributes the Vaio’s superior picture quality to both its Triluminous display tech as well as its X-Reality engine, which is said to reduce visual noise. Comparing the recent trailer for Man of Steel on the Vaio vs. my MacBook Pro, the Sony was the clear winner, even at the smaller screen size.

Sony also included its ClearAudio+ sound processing to improve the sound. I did find that music and videos sounded great on the Vaio, but it couldn’t play very loud for it to be practical. To really use the Pro 11 as a primary video machine, you’ll want to invest in an external speaker or headphones.

If you like oodles of crap software that you don’t want or need, The Vaio Pro 11 is your dream machine. In addition to Sony’s homegrown music and movie creators, you’ll get some games, apps for Slacker and iHeartRadio, no less than two Vaio apps, and more redundant antivirus software than you’ll find at a PC security conference. Bloatware, thy name is Sony.

Despite some annoyances, I’m still really impressed with the Vaio Pro 11. It used to be that smaller machines meant less powerful processors and fewer abilities. No longer.

The Pro 11 epitomizes what Ultrabooks are supposed to be

The Pro 11 epitomizes what Ultrabooks are supposed to be — laptops that make virtually no compromises for the smaller form factor. It may be deceptively lean, but this is your PC — all of it.

Well, except for one aspect, that being battery life. While the Pro 11 sips power when you’re just doing the basics — typing, web browsing, email — once you start to immerse yourself in videos or games, it drains pretty quick. I never got more than about four hours out of it during what I’d consider challenging use.

Still, if you are such a power user, that’s why Sony offers the option of the sheet battery, but then again you’ll lose a little of the ultra-mobility in this Ultrabook. So, yes, there’s still that damn choice, but at least it’s less harrowing.

The Samsung Series 9, which also has a very thin and light design for its screen size, used to represent, to me, what an Ultrabook should aspire to. But even though Sony stumbles on a few design details, its svelte number has replaced it. For the Windows 8 era — where touch and mobility reign supreme — the Vaio Pro 11 brings the “ultra” better than any other.