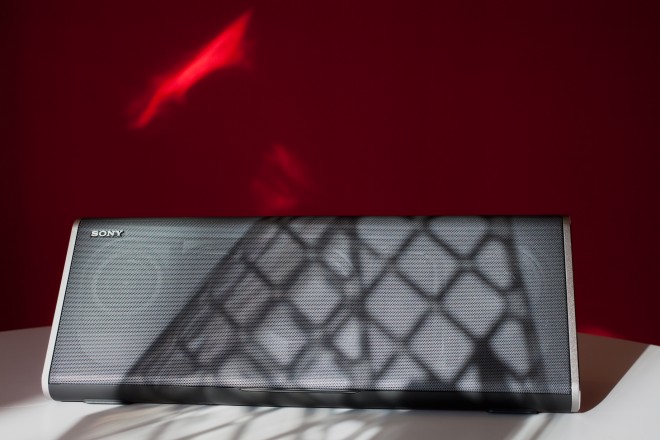 For those in the market for a portable wireless speaker, there are three options.

First, there are the massive boomboxes — they produce guttural, thumping bass, and they’re LOUD. And while they work really well on the pool deck or at a picnic, these bulky speakers are not exactly designed for quick getaways. You might need a forklift to carry one around the house.

Then there are bazillion smaller speakers — the Jawbone Jambox ($180) being the most popular by far. These offer more delicate sound with less boom and more sonic finesse. You won’t be able to crush your neighborhood with a wall of bone-smashing death metal, but you’ll at least hear the guitar licks clearly. Best of all, these speakers are extra-portable — small enough to fit into a picnic basket, and usually ruggedized a bit to handle the beach or the park, or at least all the bumps that come along with travel.

Then there are those speakers that slot right in between. They pump loud and pristine audio out of handsomely designed boxes that work well in any medium-size space in your home. They make a racket, but they won’t peel the paint. And they have plenty of low end, but they won’t get you evicted. While not pocket-sized, they’re light enough to carry around comfortably. 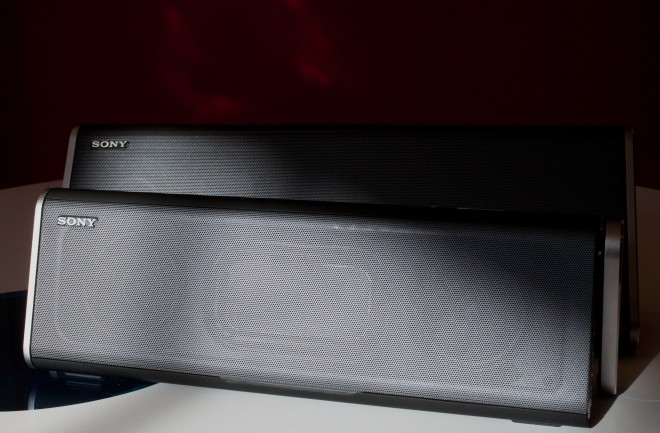 Sony has two new speakers in this middle-weight category: the Premium Bluetooth Wireless Speaker (SRS-BTX500) and its smaller sibling, the Bluetooth Wireless Speaker (SRS-BTX300). These attractive, unassuming speakers work well in just about every size of room, as well as the outdoors. All music sounds good through them — from Radiohead to Motörhead. They have little kickstands so you can tip them back and fill bigger spaces. The BTX500 in particular has some smartly engineered internals, and includes some hidden features you might not notice at first.

I was primarily interested in the larger BTX500, which sells for $300 (as low as $270 in some online stores). At about 15-inches long and only 2.5-inches thin, it’s slim enough to mimic that sound bar in your living room. (Sony told me the BTX line is styled after its home theater products, though one can’t help but notice a similarity to a speaker made by a company whose name rhymes with “nose”.) There’s a recessed hand grip in back you can use for re-positioning or carrying the speaker, and there’s a foot that snaps out in back to rest the speaker at a slight angle. 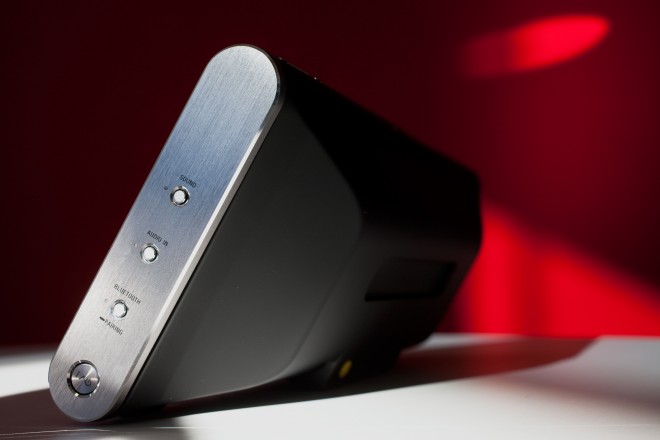 The BTX500 tips back onto a small kickstand that extends out the back of the speaker. Photo by Alex Washburn/Wired

The BTX500 uses what Sony calls a “damperless” design. While that term sounds a bit painful and possibly dangerous, it has to do with the magnetic fluid in the speaker that dampens the vibrations. Most speakers use dampers to control the highs and lows generated by a suspended speaker and minimize distortion. When those massive DJ speakers at your local pub are pounding your ear canals into submission, dampers hold them in place — but they can also lessen the sound quality. There’s also a dedicated sub and a pair of passive radiators, so there’s plenty of kick on the low end. (With the BTX300, you only get one passive radiator. First world problem, huh?)

You can stream whatever sound is coming out of your smartphone over Bluetooth audio, including Pandora, a web stream, or any music app. You can’t link multiple Sony BTX speakers together to create a stereo pair or a multi-room setup like you can with some BT speakers. And, the speaker only maintains one paired Bluetooth connection at a time, as opposed to a Bluetooth headset, which can handle multiple connections.

Syncing is ultra-simple. If you have a phone with an NFC chip (like the Samsung Galaxy S4), you can tap the phone on top of the speaker to pair it. You do need to install the Sony NFC Easy Connect app first, which seems odd, but the process is lightning fast once you have that app installed. The app is Android-only.

That said, any Bluetooth device can sync without NFC. This includes tablets, the iPhone, or even a laptop that has Bluetooth. You just use the normal pairing process. You can also connect using the 3.5mm auxiliary input. On the BTX500, there’s a USB port for charging your phone off the speaker’s internal battery. Because the BTX500 itself lasts six hours on a battery charge, this port works as a back-up battery charger — you can expect to fully recharge a smartphone about 1.5 times while the speaker is playing music.

Another perk: both BTX models will go to sleep when they’re inactive, and they will wake from sleep when you fire up your Bluetooth device. That’s one of those minor but very handy features you’ll grow to like.

The BTX500 also has a single microphone inside, and it works as a speakerphone. Press the small phone icon and you can place phone calls. In my tests, the BTX500 picked up my voice clearly, and the person on the other end sounded tonally rich. It’s extra cool to sync with a phone that supports Google Now, because you can speak to the BTX500 and do voice searches on the web or ask questions about the weather. 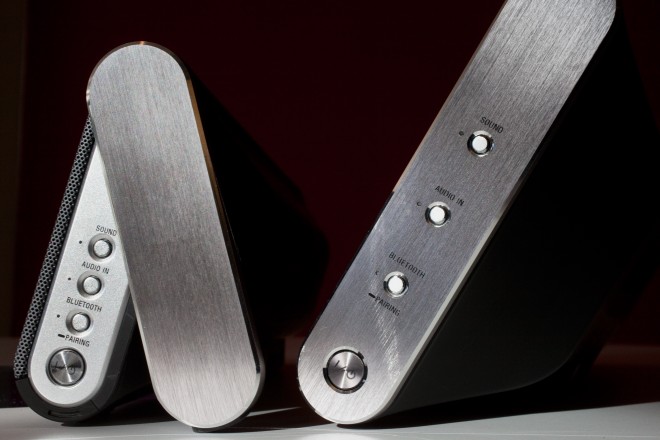 The buttons on the sides of the BTX300 (left) and the BTX500 (right). Photo by Alex Washburn/Wired

The BTX500 is intended for music, though, and I can report that it’s a top performer. I first noticed the superior sound quality when I played the new album by Javelin. You get the best of both worlds: the rich boom of the drums and the finer details of the synth and guitar work. On a song like “City Pals,” with its swirling piano part, you can easily make out each distinct note clearly. There’s very little distortion — it is effectively unnoticeable even at higher volumes.

On the side of both the BTX500 and the 300, there’s a button you can press to change the tonal quality. One mode adds more bass (it’s called Mega Bass — remember that from the old Walkman eons ago?), and one simulates a surround-sound mix. Only on the BTX500, there’s a Clear Phase mode that, in my tests, made music even better. Both models use Sony’s own Digital Sound Enhancement Engine (DSEE), a set of algorithms that adds some high and low-end smoothing and mid-range boost to the Bluetooth stream.

Overall, the BTX500 sounded way better than other mid-size speakers I’ve tested recently, like the Pioneer A3 and the Denon Cocoon. It easily rivaled the Big Jambox in terms of bass response. The only superior speaker I’ve tested recently is the Logitech UE Boombox ($250), which has slightly louder bass, and a bit clearer high end. On the Javelin album, the Logitech made drums sound a more realistic compared to the BTX500. 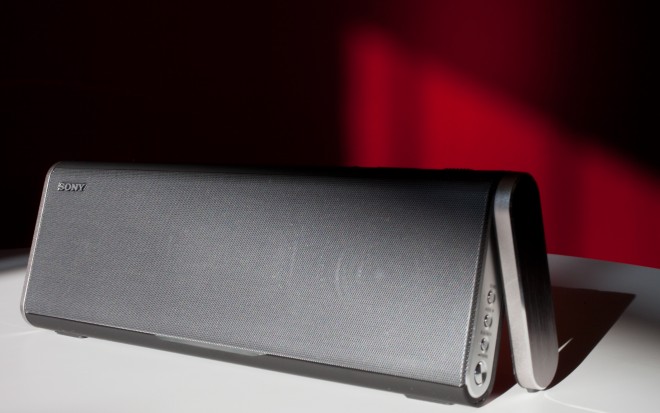 The BTX300 also has a small brushed-aluminum kickstand on the side that flips back. I prefer the design of the BTX500, which has a foot on the back. It makes it a bit sturdier. Otherwise, the features for speakerphone and sound modes (minus Clear Phase), are the same.

Forced to pick between the two, I’d ask a series of questions. Is the bass important? Do you prefer a little signal processing to make the vocals clearer? How much do you like lugging a 15-inch soundbar around? The BTX500 is the better choice for audiophiles or people who want more power and presence out of a speaker. For those who consider portability the deciding factor, and maybe don’t care as much about loudness, the BTX300 is also a remarkable speaker, and probably the better pick

There’s a nagging issue, though: the price. The Logitech UE Boombox does sound better and costs between $20 and $50 less, depending on the outlet. In the end, I preferred the larger Sony SRS-BTX500 due to the NFC pairing, the speakerphone, the “Clear Phase” sound mode, and all around high-quality playback. Given the choice, I’d skip the Logitech and spend the extra money for those features — and then earn bragging rights when I explain the damperless speaker design to my nerd friends.

TIRED Not quite a lush sounding as the Logitech UE Boombox. Larger BTX500 has the better features, better design and the better sound, but is slightly too expensive. 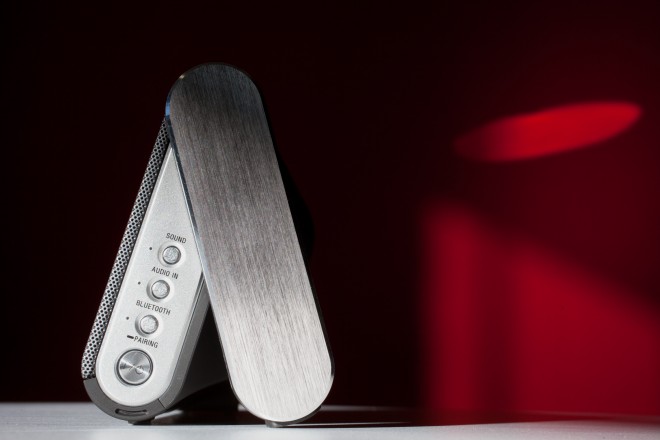