Good news, Mac users: You can now Snapchat on your Mac with a new unofficial Snapchat client called Snapped.

Snapped is currently in beta, and brings much of the Snapchat experience to desktop. You can log in to your Snapchat account, send photos to your friends and view images they send you — all without having to grab your phone.

The app is the product of ThinkDev, a small development shop run by two University of California, San Diego students. It runs on OS X 10.9 Mavericks, and will eventually be available in the App Store.

To use Snapped, log in to Snapchat using your username and password. Choose the desired amount of time for your snap, select the recipients and you’re done. By default, Snapped uses your Mac’s front-facing camera to take photos, but you can also upload an image from your hard drive. 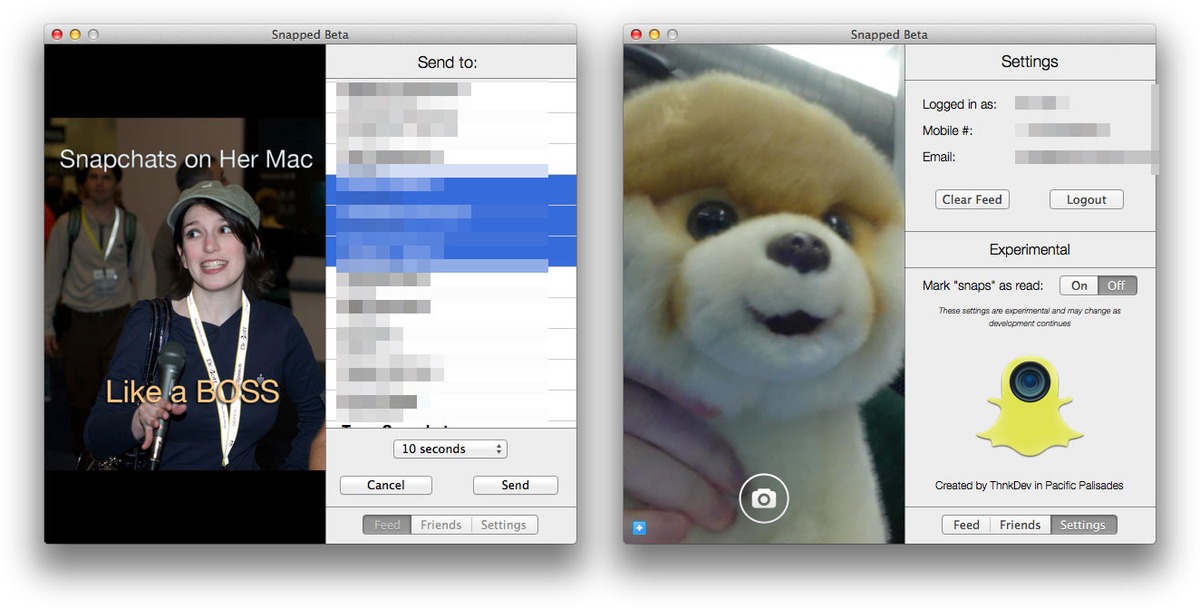 The app also provides access to your friends list, sent messages and inbox items. You can send messages, as well as read unread messages, directly from the app.

Because Snapped uses Snapchat’s private API, it has a few experimental features that are noteworthy.

You can opt to not mark snaps as read. This means that if my friend sends me a snap, I can continue to look at the photo over and over again — and she will think I haven’t seen it yet.

You can also opt to mark messages you send as read before the recipient opens it. This means that if I send a snap and immediately regret it, I can instantly mark it as read, and my friend will never get a chance to see what was sent. In my tests, the “mark as read” feature was a bit buggy, but the idea is quite clever.

For now, you can’t add text or filters to snaps sent from Snapped. Adding texts to snaps will be part of an upcoming update, according to Josh Cohen, one of ThinkDev’s cofounders. Other new features are also on the way.
Security and API Access

Snapped works by using Snapchat’s private API. Unlike companies such as Twitter and Facebook, Snapchat hasn’t made its developer API accessible to outsiders. However, that hasn’t stopped third parties from reverse-engineering the API. In fact, it was a modified version of the reverse-engineered Snapchat API that led to the leak of 4.6 million snapchat usernames and phone numbers earlier this month.

In the past, we’ve seen third-party Snapchat clients for Windows Phone and BlackBerry 10 hit app stores, but to our knowledge, Snapped is the first desktop Snapchat client.

As a result, Cohen acknowledges that experimental features, such as the ability to avoid marking snaps as read, could be shut off at any time.

It also raises potential questions about the app’s security. Cohen said Snapped is using Snapchat’s own API to log in and access messages. However, he added that Snapped encrypts usernames and passwords, and doesn’t store anything in plaintext.

I isolated outgoing traffic from Snapped, and only saw data transmitted back to the Google AppSpot that hosts Snapchat on the web, so that’s a good sign.
It’s Fun to Snap on Desktop

Snapchat, like Foursquare, Path and WhatsApp, is a mobile-only social network. It makes sense, too, given the concept behind the app and how most people use it.

That said, I actually find it quite handy to have a Snapchat client on desktop — if only as a quick way to view snaps from friends, or to send a funny photo that might not exist on my phone, but instead on my computer.

Snapped is free to use, though ThinkDev is accepting donations.