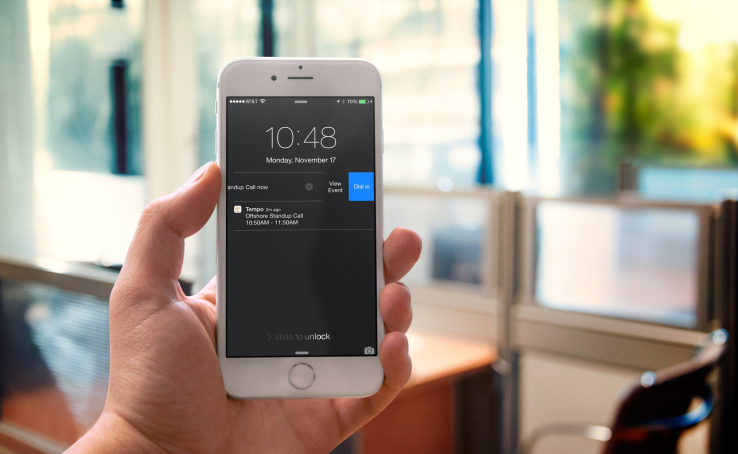 Tempo, the smart calendar for iOS borne from the same organization as Siri, has become the latest app to take advantage of features in iOS 8 as it aims to become your phone-based personal assistant.

The free app now includes a smart widget that brings an overview of key notifications and information to the homescreen. The idea here is to make that overview easily available to at all times, so no opening apps or digging into menus is required.

Tempo has also now gotten ‘evening notifications’ which serve up important information to “prepare for the next day with ease.” These new notifications cover what is on the horizon for tomorrow, and provide a sort of debrief of the current business day and its most salient points.

The company also shared with TechCrunch that it plans to finally introduce an Android app in the first half of 2015. There’s good news if you can’t wait that long, however, since it is testing a beta among ‘100s’ of users which you can apply to join here.

One other item in progress is “a new, powerful way to display anticipatory alerts and actions” to users balance and manage their lives. The company isn’t saying much more than that for now, but it looks like it has big plans for 2015.

Tempo AI, which raised $10 million last year, wants its app to be a personal assistant, rather than just a calendar. In that respect, evening notifications are an important and indicative new addition. That focus could set its apart from others like Cue, Sunrise, Timeful, Accompli, Lowdown that compete in the crowded calendar app space.

Going global is another key objective for Tempo, and this update adds nine new languages to the app interface, they are Danish, Dutch, Finnish, Japanese, Korean, Norwegian, Polish, Russian, Swedish. It has also gone live in an additional 27 countries in Asia, having expanded across Europe in a similar fashion back in September.

While iOS monetizes at a higher rate than Android, the Google-owned platform has greater global reach. It is clearly is an important vehicle for reaching large audiences outside of the U.S. market, even when the primary audience is business users, as is the case with Tempo.[TechCrunch]