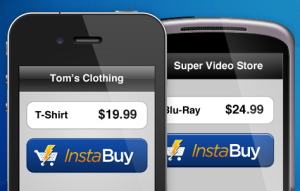 Shopzilla Inc., the home to several online shopping brands including Bizrate, Beso, Shopzilla, Retrevo, TaDa, and others, as well as an affiliate network, has acquired Zappli, an early stage startup which had developed a mobile shopping app myShopanion for iPhone, as well as a more recently introduced mobile checkout experience called “instaBuy.”

Launched last fall, instaBuy was similar in spirit to Amazon’s one-click checkout, as it also served as a way for mobile shoppers to provide their contact info, billing address, and credit card details just one time, in order to later access it from any mobile application with just a tap. (But to avoid patent infringements with Amazon, instaBuy requires a couple of clicks, not one). Zappli first showcased the technology in its myShopanion app, which allowed users to shop from dozens of retailers, including Wal-Mart, Buy.com, Kohl’s, Macy’s, Best Buy, Barnes & Noble, and others.

According to Shopzilla CEO Bill Glass, his company was first introduced to Zappli in the context of potential strategic partnership agreements. And, as is often the case when big meets small, what was initially a discussion about working together turned into something more. “Through those meetings, we were very impressed by the significant expertise and cutting-edge technology in the mobile commerce space, which they developed over the last three and half years,” Glass explains, “and those initial partnership conversations led to the acquisition.”

The companies aren’t disclosing the deal terms, but characterize it as well-received by the team and investors alike.

In the wake of the acquisition, the entire Zappli team will join Shopzilla, working out of their existing locations in San Francisco and South East Asia, and Shopzilla plans to significantly expand that group going forward. Zappli’s CEO and co-founder, Philippe Suchet, is now the Chief Strategy Officer of Shopzilla, Inc., and Zappli’s CTO and co-founder, Chandra Siva, is going to lead key technology initiatives at Shopzilla.

Meanwhile, Zappli’s customer base will be kept, then progressively transitioned to Shopzilla properties.

Of specific interest is Zappli’s mobile commerce technology, Glass tells TechCrunch. The startup had one provisional patent in this area, which has also been transferred over. ”We have millions of consumers that we  already connect with thousands of retail partners,” says Glass. “Those shoppers’ needs and behaviors are evolving quickly, especially as they have become  connected at all times via mobile devices.”

In the short-term, Shopzilla plans to use Zappli’s technology by bringing to market mobile and desktop apps that allow consumers to comparison shop across thousands of retailers, and checkout more quickly.

Mobile checkout is a still a huge pain point in the e-commerce industry, and is now being attacked by a number of companies ranging from major mobile players like Google and Apple, to credit card companies like Visa and MasterCard, as well as technology firms like PayPal and startups like Braintree, to name just a few. Using the mobile checkout experience Zappli developed, Shopzilla’s overall goal is to help retailers increase conversions, and ultimately, their ROI.

“This is an investment that we believe has the ability to dramatically transform the profile of our business,” says Glass.