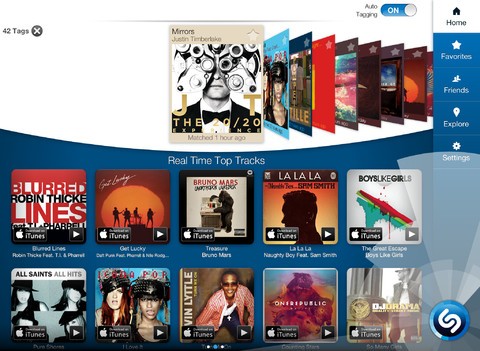 It’s been a mere few weeks since Shazam introduced those new location-based and tagging features for the tablet version of its iOS app, but the music-driven service isn’t stopping there. Reaching version 6.1 on Apple’s platform, today Shazam’s universal application is bringing a few more tidbits to both the iPhone and iPad. Handset users, for one, will notice speedier load times within the app and a rather fresh look that focuses on displaying more info on the tab bar — such as friend tags and chart updates. On the bigger screen, Shazam says it’s improved things by allowing users to more easily delete tags from Favorites and by adding under-the-hood tweaks which should make for a smoother experience while browsing the Friends feed.

The bigger news, perhaps, is Shazam Pulse, a music discovery tool that’s making its way to the iOS app, one which allows folks to quickly see and sample the music currently being tagged by people. It’s worth nothing all these new features are available for Shazam and Shazam Encore, so fret not if you have one or the other.