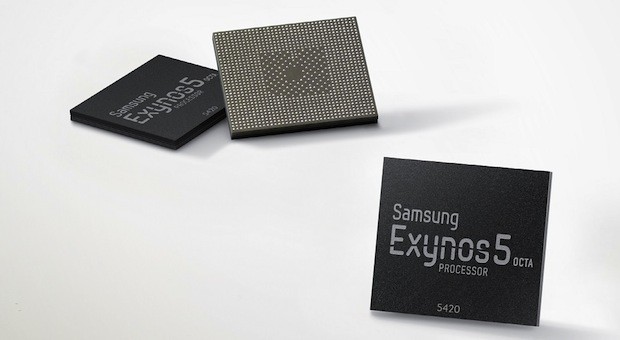 We’ll have to change our terminology for Samsung’s Exynos 5 Octa mobile chips now. We’ve been calling them “not-quite” eight core CPUs since they can’t actually use all eight at once, but the company’s new Heterogeneous Multi-Processing solution is going to change that. Once it’s available in Q4 it will let devices access both sides of the big.LITTLE ARM configuration simultaneously, which it claims will increase both performance and efficiency. While software threads with high priority use the “big” A15 core, lower priority tasks can run on the “small” A7 without needing to switch back and forth. Samsung isn’t the only one running this setup however, as MediaTek announced an implementation for its MT8135 back in July. There are more details included in the press release (after the break) but we’re not seeing any confirmation if this will ever be enabled on existing / announced devices like some flavors of the Galaxy S 4 or the Meizu MX3. Either way, the folks at Qualcomm might want to put together another video.

“It’s usually assumed that the big CPU will do all the performance-critical work, however, power-efficient little cores can handle many significant workloads all on their own, so the workload is balanced within the system,” said Taehoon Kim, vice president of System LSI marketing, Samsung Electronics. “big.LITTLE processing is designed to deliver the right combination of processors for a specific job. An eight-core processor with HMP is the truest form of the big.LITTLE technology with limitless benefits to the users of high-performance, low-power mobile products.”

HMP is the most powerful use model for ARM big.LITTLE technology, as it enables the use of all physical cores at the same time. Software threads with high priority or high computational intensity can be allocated to the ‘big’ Cortex-A15 cores while threads with less priority or are less computationally intensive, can be performed by the ‘LITTLE’ Cortex-A7 cores, enabling a highly responsive, low-energy system to be built.

Software implementation is essential to maximizing the benefits of big.LITTLE technology. Multi-processing software controls the scheduling of threads of execution to the appropriate core. In earlier versions of the big.LITTLE software, the whole processor context is moved up to the ‘big’ core or down to the ‘LITTLE’ core based on the measured work load. In-depth study and analysis of diverse use case scenarios enable Samsung to achieve efficiency and high-performance, while managing power levels to deliver optimal user environments.

The HMP solution for Samsung’s Exynos 5 Octa application processors will be available to customers in 4Q of 2013.