The device comes with Android 4.2 (Jelly Bean), a 4-inch display, and a 5-megapixel camera. 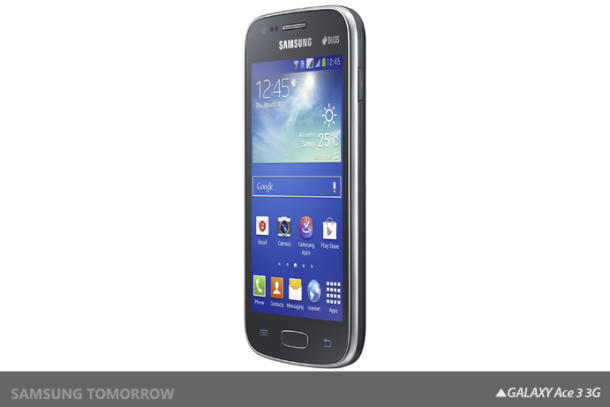 Samsung has announced a new addition to the company’s smartphone line.

Dubbed the Samsung Galaxy Ace 3, the device comes with a 4-inch screen and a 1GHz dual-core processor. It’s running Android 4.2 (Jelly Bean) and comes in the customer’s choice of 3G or 4G LTE. The 3G option comes with 4GB of internal memory, while the 4G LTE option has 8GB of internal memory. Both support a microSD card of up to 64GB of storage.

On the back, users will find a 5-megapixel camera. The software coupled with that lens allows for users to share photos with others and take several snapshots and choose what they think is best.

As with several other recently released Samsung handsets, the device comes with some of the company’s nicer software features, including one called Smart Stay that dims the screen to save battery life when users look away. It also comes with Samsung’s Siri alternative, S Voice.

Samsung has not yet announced when the handset will be available and where. It also didn’t provide a price.