Facebook Home And Windows Phone Are Making The Same Apps-Related Misstep
Nextpeer, Which Has Added Multiplayer Mode To 1,000 Mobile Games, Comes to Android 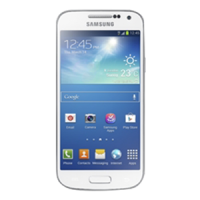 Samsung has yet to officially confirm the Galaxy S4 mini, but the smartphone’s brief appearance on the company’s app store earlier today backs up rumors of a summer launch. The listing was spotted and screencapped by TGspot (link via Google Translate) before it was removed.

The Galaxy S4 mini appeared with the model number GT-I9195 as part of a line-up of Samsung smartphones on the company’s app store site. The handset is a smaller, cheaper version of Samsung’s fastest selling phone ever, which recently hit 10 million channel sales less than a month after its international launch on April 26.

Samsung has positioned the Galaxy S4 as its iPhone challenger and a smaller version may help attract new customers who were previously but off by the phablet‘s 5-inch screen. Though Samsung has yet to announce a release date for the Galaxy S4 mini, a summer date would give it a head start over Apple’s fall lineup of new products, potentially including the iPhone 5S.

The appearance of the smartphone on Samsung’s apps site is the latest leak backing up rumors of the phone’s imminent release. Two weeks ago, photos purportedly showing the Galaxy S4 mini were posted by Sina Weibo user PunkPanda, who has leaked authentic photos of unreleased Samsung devices in the past. The photos appeared to confirm previously rumored specs, including a 4.3 inch gHD display and a 8-megapixel rear camera.