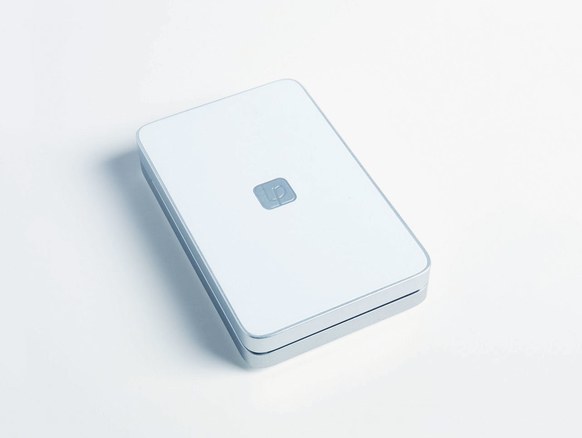 THE LIFEPRINT PRINTER rethinks the tired idea of a handheld device that spits out overpriced, undersized hard copies with an interesting concept: DIY Augmented Reality, delivered via a tiny photo print.

LifePrint’s $130, pocket-sized printer pairs via Bluetooth to print any image off your phone, efficiently depositing it onto sticker-backed 2- by 3-inch paper, but the real magic happens when you opt to print your videos. Yes, print your videos. Choose a video clip with the LifePrint app, choose a frame from the video, apply Instagrammish effects, text, and whatnot, then spit out a print. Then use the app while aiming your phone’s camera at the print and it magically comes to life, playing the full video corresponding to the picture on your phone’s screen within the frame of the print itself.

WIRED
This neat idea gives new life to the Polaroid concept and makes AR accessible to the masses. It’s fun to watch a still picture turn into a video—with audio!—and it has the capacity to turn prints into treasured keepsakes.

Beyond printing videos, LifePrint features a built-in social network so you can send these so-called hyperphotos to other printers (with permission, of course). LifePrint bills it as an easy way of getting prints and videos to relatives without dealing with email attachments or sharing websites. All grandma has to do is keep the paper (three 10-packs run $20; 11 packs cost $50) stocked in the printer…

TIRED
…but unfortunately she also must use the LifePrint app, the most crash-prone app I’ve used in recent memory. I didn’t experience a single session—literally not one—in which the app didn’t hang or otherwise fail, requiring a force quit and reload. It doesn’t matter what you are doing with the app—printing pictures or trying to view videos through the AR system—the app inevitably dies. It’s frustrating to spend several minutes aiming your phone at a picture on the table, trying to get the right angle so the AR video will play, only to realize it will never work until you restart the thing.

The app is loaded with features but isn’t fully intuitive, and would benefit from better documentation, particularly given the family-friendly target audience. As it stands, LifePrint doesn’t offer a quickstart guide or even a manual on its website, just a two-minute video that covers the basics yet doesn’t even explain how to turn off the printer.

Although the prints you make last forever, the AR feature will endure only as long as LifePrint stays in business. That requires tremendous faith, which might be a tough sell given the app’s bugginess.

So, to recap, for a typical usage model you can upload your video to LifePrint, use the LifePrint app and printer to spit out a hard copy of a single frame from that video, give that hard copy to a friend, convince them to download the LifePrint app, then have them point their phone at the print so they can watch the video on their phone.

Or you could just upload your video to YouTube. Your call.