Up Close With The Next Big Home Commodity: LED Lighting
Google Invests $75M In Iowa Wind Farm, Bringing Its Total Green Energy Investments To Almost $1B 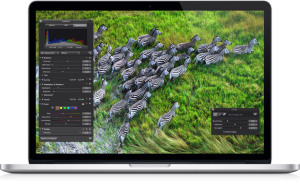 When Apple introduced the Retina MacBook Pro and new MacBook Airs in June, it also quietly noted it would be withdrawing its computers from voluntary EPEAT environmental standards qualification. That provoked a minor customer furor, with some government agencies in particular saying they might not be able to continue sourcing notebooks from Apple, and the company promptly rejoined the program. But questions of whether the new MacBook Pro in particular could meet the EPEAT standards, which include a provision for products being able to be “upgradeable with commonly available tools” still hung in the air, until a new rule change.

The EPEAT organization has verified the MacBook Pro, Air and a number of other new unibody laptops from Lenovo, Samsung and Toshiba, based in part on the wide availability of external hardware like HDs and optical drives that can be added via USB and other I/O ports like Thunderbolt. Once upon a time, the “upgradeable” rule was taken to mean things like expandable memory, easily replaced internal components like HDs and batteries, but the shift in definition (which EPEAT calls a “clarification”) reflects a shift in the manufacturing trends of notebooks and all-in-ones, and also, it’s definitely true that higher speed I/O (USB 3.0, Thunderbolt) makes it possible to do much more with external accessories today than in the past.

The organization also had concerns around ease of disassembly, an important point for making notebooks easy to recycle and for increasing their longevity with users via things like battery replacement. Provided with instructions from manufacturers, however, EPEAT found its lab could take the laptops apart in 20 minutes at the outside, and take batteries out in three minutes max. That’s apparently even true of Apple’s glued-down MacBook Air batteries, so the company’s ultraportable gets a pass and retains a certification that makes it much easier sell to government and NGOs who look to EPEAT compliance as a way of showing off a green-minded organizational ethos.

Not everyone is pleased with the outcome, however, as Greenpeace has spoken out about the change to the assessment standards in a statement from the organization. Greenpeace’s Casey Harrell said in that statement that essentially, the process involved to replace the batteries is by no means accessible to the average user, and doesn’t reflect real-world experience since it also means voiding the warranty if a user tried to replace the battery on their own. Harrell included the following in the statement:

Is it a coincidence? It’s unclear why EPEAT caved in, but the impact is that EPEAT has confused consumers and businesses who want to buy green electronics that can be repaired and will last a long time, and sets a dangerous trend for the burgeoning market of ultrabooks.

Apple isn’t the only company floating smaller, thinner unibody laptops as the future of portable computing, but it does appear to be the one doing so with the most success, so while Greenpeace has a tradition of calling out Apple on its environmental gaffes, this time the allegations are likely laid at the feet of the right target.