Bitcasa launches unlimited cloud storage in Europe starting at €60 per year
Verizon debuts the Droid Maxx, the successor to the RAZR Maxx HD 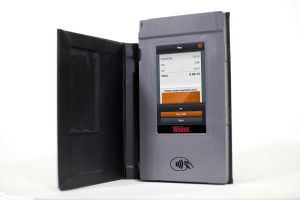 Viableware, the creator of restaurant payment platform RAIL, has raised $6.5 million in Series B funding. Led by a group of angel investors and joined by Swiftsure Capital LLC, this round brings Viableware to a total of $7.45 million in funding.

RAIL is designed to mimic the look of a traditional restaurant bill, while providing an electronic interface for easy and secure payment. Customers can use RAIL to calculate tips, split the bill and pay in several different ways, including credit or debit card, Paypal, or by smartphone. The system keeps credit card information safe by letting users swipe themselves and doesn’t keep unencrypted card information.

This payment system has been in the media since 2011, but Viableware CEO Snell tells me the two companies that have RAIL have only been using it for two months. He says the funding will help implement more RAIL systems nationwide, as well as build the company’s sales and tech teams. RAIL is used by two restaurants in the Seattle area and launching in three more restaurants next month. Snell says several other national brands are still waiting to try it out, including P.F. Chang’s, which will pilot in the next few weeks.

“What we’re doing essentially is we’re extending the point-of-sale system to the table,” Snell explains. “So we’re not a payment method, we’re actually a platform that all the payment methods would use.”

Many restaurants already have a self-payment option in the form of small table kiosks, like Ziosk or E La Carte. E La Carte gives diners the option of ordering, paying the bill and playing games all from a tablet on the side of the table. Ziosk and E La Carte have been integrated into chains such as Chili’s, Outback Steakhouse and Genghis Grill. However, Snell is opting for a different format to better serve his target clientele: upscale restaurants for leisurely dining. While tablets like E La Carte make for easy ordering and payment, RAIL is supposed to complement the waiter’s role rather than replace it.

The platform comes as a package with hardware, support and installation, but prices range from $300 a month to $550 a month for each restaurant location. The wait list for RAIL includes 1,700 new locations and 12 different restaurant groups.