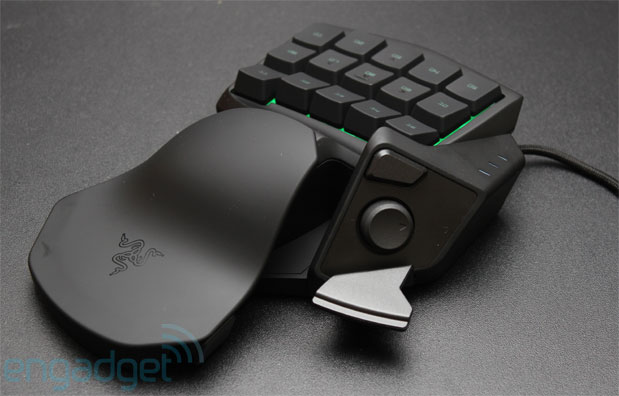 Most PC gamers are content to game on the standard QWERTY keyboard layout, but a select few prefer a special niche peripheral: the keypad. Razer’s been building these single-hand keyboards since it helped Belkin create the n52te SpeedPad and it’s still at it, today announcing the Razer Tartarus. Featuring 15 face keys and 25 programmable buttons (including an eight-way directional thumb pad), the Tartarus is billed as a successor to Razer’s Nostromo — although it actually has more in common with the $130 Orbweaver.

Like the high-end keypad, the Tartarus has fully programmable keys with unlimited-length macro support, Razer Synapse 2.0 for profile syncing and key-binding and the company’s modern design language, but it eschews the Orbweaver’s articulating ergonomics and mechanical keys to hit a lower $79 price point. These efforts shaved 50 percent off of the product’s sticker price, but also cost it an additional row of keys. We spent a few minutes with the device and were pleased at how well it worked right out of the box, handily emulating the standard WASD gaming setup it’s built around. We did miss the Orbweaver’s additional buttons, however, as the smaller keypad’s three-row setup left us reaching for a row of numerical analogs that simply weren’t there. It’s not the game controller for everyone, but it’s good to know that there are options for niche peripheral fans on a budget. Read on for the company’s official press announcement.

(Not for) Immediate Release:

“The Razer Tartarus places an infinite amount of control into a single hand-literally-affording immense flexibility, power and an ultimately free other hand, which is a deadly competitive advantage,” says Min-Liang Tan, Razer co-founder, CEO and creative director. “For serious gamers, this keypad can make the difference between victory and defeat.”

The Razer Tartarus is enabled to be configured with Razer Synapse 2.0, the proprietary software that functions as the brain of the keypad. Razer Synapse 2.0 allows users of Razer products to save custom profiles and sync them from anywhere in the world through the cloud system to be accessed from any computer anytime, anywhere.

Control an infinite number of commands at your fingertips with the Razer Tartarus expert gaming keypad, featuring 25 membrane keys including a programmable eight-way thumb-pad. The Razer Tartarus is designed to deliver absolute comfort during extended play with an adjustable soft-touch wrist pad. Use Razer Synapse 2.0 to save your custom settings and update from anywhere in the world.

For more information about the Razer Tartarus, please visit www.razerzone.com/tartarus.