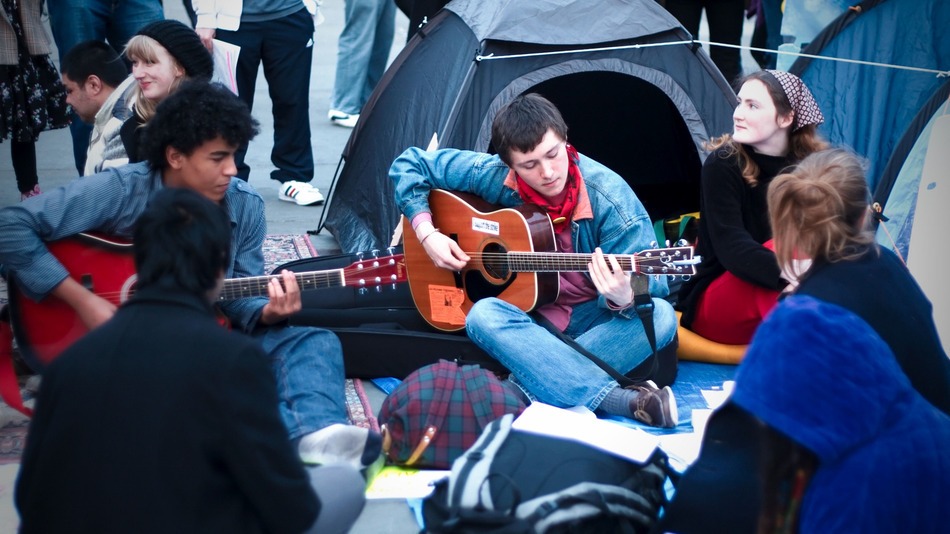 With its sweet acoustic guitar and welcoming, all-inclusive lyrics that point to the shifting dynamics of 1960s America, “Come gather ’round people wherever you roam / And admit that the waters around you have grown,” Bob Dylan’s folk anthem “The Times They Are A-Changin'” is the ultimate protest song.

Though Dylan and other iconic folk and rock artists of the ’60s, such as The Beatles and Joan Baez, popularly protested in support of the social-change-to-come of the decade, protest songs are in no way limited to a single topic and era. In the ’90s, feminist D.I.Y. musician Kathleen Hanna led punk band Bikini Kill and the Riot Grrrl movement against the patriarchy. Hanna worked closely with D.C. hardcore legend Ian MacKaye, who fronted Minor Threat and Fugazi in the ’80s and ’90s with an anti-capitalist stance that influenced his music’s D.I.Y. aesthetic and ethics. Soul spoken-word poet and musician Gil Scott-Heron’s single “The Revolution Will Not Be Televised,” as well as his record of the same name, honestly spoke of the racial divide in America in the ’70s.

And while labeling these diverse songs under “protest” may seem reductive, it highlights the ability of music to connect artists, listeners and ideas to discuss and drive the issues in — or not in — society’s consciousness.

We’ve paired with ONE to share an activist playlist ahead of next week’s G8 summit in Northern Ireland, as part of ONE’s agit8 campaign which aims to put pressure on G8 leaders to take action against extreme global property. In addition to the groundbreaking protest songwriters mentioned above, this playlist includes legends like John Lennon and Marvin Gaye and contemporary artists like Arcade Fire and Killer Mike.