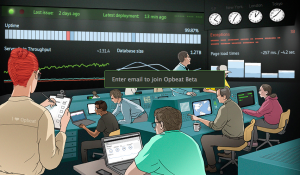 While it’s apparently becoming easier and easier to become a developer — judging, at least, by the number of “learn to code!” platforms popping up by the month — the role of a lead developer and engineer within a young tech company has become increasingly demanding over the last five years. The job description now includes an expanding (and diverse) set of responsibilities. While many have focused on the consumer-side, Paul Graham recently wrote that “startups building things for other startups” (and solving their problems in a clever way) have the potential to take off in a big way given the growing pool of potential users — in other words, other startups.

Opbeat, a stealth, Danish startup founded last year, is a startup that’s doing just that — particularly for the many over-worked engineers and developers to be found slaving away at your local startup. Specifically, Opbeat wants to help developers by giving them their own, hosted Control Center for the many web operations they manage on a daily basis — and one that can be set up in a matter of minutes.

By doing so, the young startup has attracted some of the most influential startup developers in recent memory not just as users, by as investors. To wit: Opbeat is announcing today that it has raised two rounds of outside financing from an impressive list of investors, beginning with — most recently — a $2.7 million series A round led by Balderton capital.

The startup also raised a seed round earlier this year from a group of angel investors, which include Instagram co-founder Mike Krieger, Facebook co-founder Andrew McCollum, former Spotify CTO Andreas Ehn, 23 co-founder Steffan Christensen and Thomas Madsen-Mygdal, an early investor in Podio, which was acquired by Citrix last year.

For Krieger, the contribution to Opbeat’s seed financing marks the first investment he’s made since Instagram was acquired by Facebook last year. “When I saw [Opbeat’s] approach to taking on the challenges of life for developers, I immediately wanted to be involved,” Krieger says of the investment. Having been one of the leaders of a small team at Instagram that was tasked with scaling the app’s backend (and later managing that backend at scale) all while simultaneously working on building the product itself, the Instagram co-founder says that he “could relate to the serious pains Opbeat is trying to solve on the developer side.”

Opbeat co-founders and serial entrepreneurs Rasmus Makwarth and Ron Cohen say that the idea behind their new startup was born from the frustration of working at multiple tech companies (including several failed startups), where they repeatedly ran into the same problem. The small teams of developers and engineers at these businesses ended up wasting weeks and months cobbling together internal tools to manage the company’s web operations.

So, they decided to build a collaborative, hosted web operations platform for developers that can be set up in a matter of minutes, so that, instead of scrambling to apply duct-tape-style fixes and focusing on “maintaing,” they can get back to building the actual product. In a post that’s well-worth the read, 23 co-founder and Opbeat investor Steffen Christensen describes how the role of the developer and engineer has changed over the last five years, and why a service like Opbeat is a critical time-saver in light of those changes.

In the age of web tools and development, while the software stack has “become decidedly more varied,” the prevailing mindset is that operations and management should be easy, he says. Many assume that, because entrepreneurs and developers can turn to AWS, Rackspace or Azure — because hosting and dev tools have become cheaper and easier to procure — that anyone can manage web development. In fact, it results in developers “taking over a bigger and bigger piece of operations and, in many cases, all of it,” Christensen explains.

Today, developers find themselves having to deploy code “across several different services and servers, all integrating with each other and third-party services,” he writes, and “meanwhile, they’re responsible for uptime and stability.” In light of this — and their increasingly important role within companies — developers need a control center.

“We didn’t have the build-or-buy option, so we had to roll out our own fix,” the 23 co-founder continues, but, with Opbeat, lead developers and engineering teams now can farm some of that work out to a third-party.

Facebook co-founder and Opbeat investor Andrew McCollum echoes a similar sentiment in his own recent Opbeat blog post, saying that the up-side of the many new tools and cloud platforms available to developers is that it’s now easier “to deploy and scale web than ever before.” As a result, many startups and founders are electing to “forgo a dedicated Ops team for longer,” instead leaving deployment and server management responsibilities in the hands of developers.

McCollum says that he thinks Opbeat can be a “powerful new tool in this burgeoning DevOps movement,” because it enables engineers to “move faster and spend less time fixing things when they break.” In turn, for teams that may not have the same “resources of Facebook,” he concludes, Opbeat can help them “adopt some of the goals of rapid development and empowering engineers” that one usually only finds at larger, well-financed tech companies.

The Opbeat co-founders are convinced that the problem the company wants to solve is one that many startups across the map are currently wrestling with and, as a result, presents a significant market opportunity. For now, the co-founders say that their key focus is on developers in the U.S., where they see the largest need (and opportunity), and that their new capital will help be used to ramp up hiring and help Opbeat do some scaling of its own.

For more on Opbeat, and to sign up for Opbeat’s beta test, find the startup at home here.