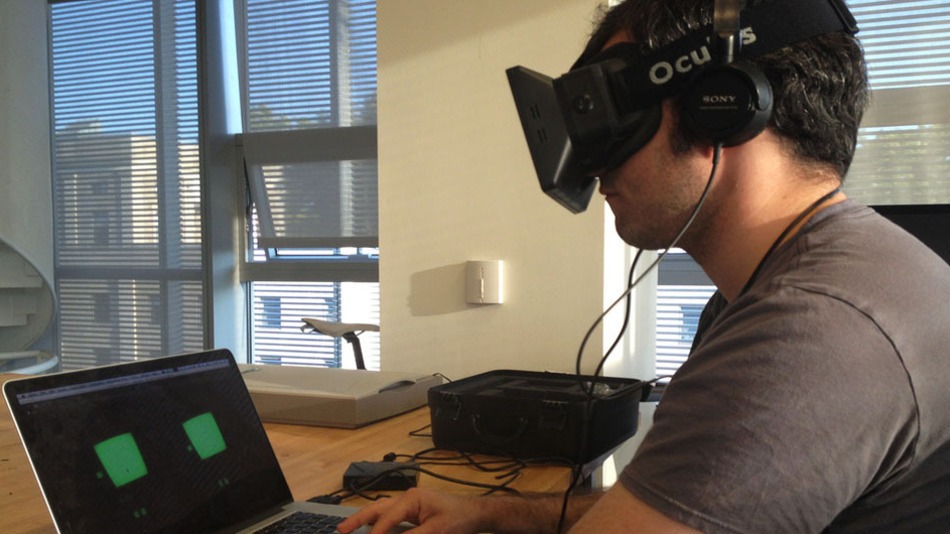 The groundbreaking science fiction novel Neuromancer has inspired a new experiment that pairs the iPhone with the Oculus Rift virtual reality headset to offer a unique new gaming experience.

Created by Greg Borenstein, the experimental game is called Case and Molly, after two of the main characters in the novel. Mirroring the concepts imagined in the 1984 book, two players coordinate their movements between virtual reality and a real location.

“I think it’s so cool that the Oculus Rift could make it possible to see, in real-time, any place in the world in 3D,” says Borenstein. “Unfortunately, there’s no stereo camera on the market that is both affordable and capable of simple real time streaming…”

To come up with a similar dynamic in reality, Borenstein used two iPhones taped together to serve as a kind of 3D camera and streamed that live video into an Oculus Rift headset.

Although the performance of the experimental game appears to be laggy in the video (see below), it nevertheless shows the potential of taking a common device like the iPhone and marrying it with a bleeding-edge gaming tool like the Oculus Rift to explore never-before-possible scenarios.

Case and Molly First Playtest from Greg Borenstein on Vimeo.

However, when Neuromancer author William Gibson caught wind of the game, he took to Twitter on Saturday asking questions about what appeared to be an unauthorized project. Gibson wrote:

Would whoever is making that Neuromancer game for Oculus Rift please get in touch with me? I knew nothing of it until yesterday.

Thankfully, for all involved, what seemed like a potential legal firestorm turned out to be nothing more than a misunderstanding. The game is not for sale and was only created as an experiment for Borenstein’s Science Fiction to Science Fabrication class.

Borenstein, an artist in the Playful Systems Group at the MIT Media Lab, responded to Gibson directly on Twitter, writing, “I made the game to explore the particulars of the digital/embodied cyberspace/meat collaboration you describe in Neuromancer… Sorry to startle.”

When we asked Borenstein about the brief mix-up, he said, “I’d never use Gibson’s IP in a commercial project without permission under any circumstances. I’ve been a fan of Gibson’s writing since high school and it’s played a huge role in shaping my work.”

And while the game is non-commercial, those interested in giving the experimental game a try can do so by downloading the code made available by Borenstein on GitHub.