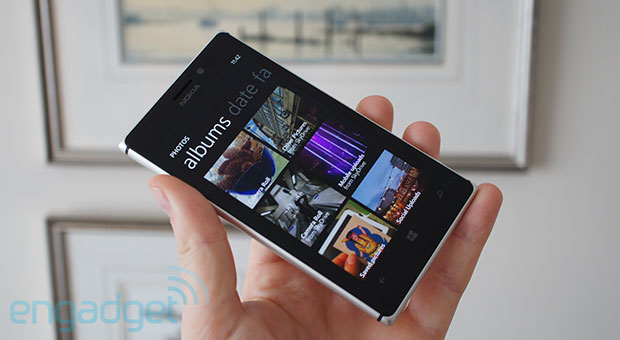 It’s been just half a year since Nokia revealed its first Windows Phone 8 device, and we’ve already got another flagship to review. The Lumia 925 marks a departure in design for Nokia — it looks nothing like its predecessors, barring an expanse of screen and some capacitive Windows buttons. This time around, the phone is housed in an aluminum frame, making it Nokia’s first metal smartphone since those heady Symbian days. This, alongside some hardware repositioning and (minor) specification changes has been enough for the Lumia 925 to weigh notably less than its 920 forebear — and we think it’s enough to feel in your hand. As we juggled the two Windows Phones ahead of this review, our first impressions were that the 925 was also much easier to hold, despite only a negligible difference in thickness.

Arriving in three comparatively restrained monochrome hues (white, black and grey), Nokia’s returned to OLED for its display tech, although it’s the same 1,280 x 768 resolution as the rest of the 920 series and includes the company’s anti-reflective screen technology for good measure. Its new Smart Camera app debuts on the Lumia 925, standing alongside the stock app and offering up some interesting new picture-taking options.

This, alongside some hardware repositioning and (minor) specification changes has been enough for the Lumia 925 to weigh notably less than its 920 forebear

Otherwise, it’s an awful lot like the Lumia 920, at least on paper: there’s the same lauded 8.7-megapixel camera sensor (with an extra lens element), the same dual-core 1.5GHz processor and the same OS (albeit with some beta goodies). Nokia reckons that the phone is geared towards a different buyer than those who bought the Lumia 920, but alongside Verizon’s recent US-only Lumia 928, is there enough to get fans that skipped on last year’s model to buy this time around? And is there enough to persuade you not to hold out for what’s on the horizon?