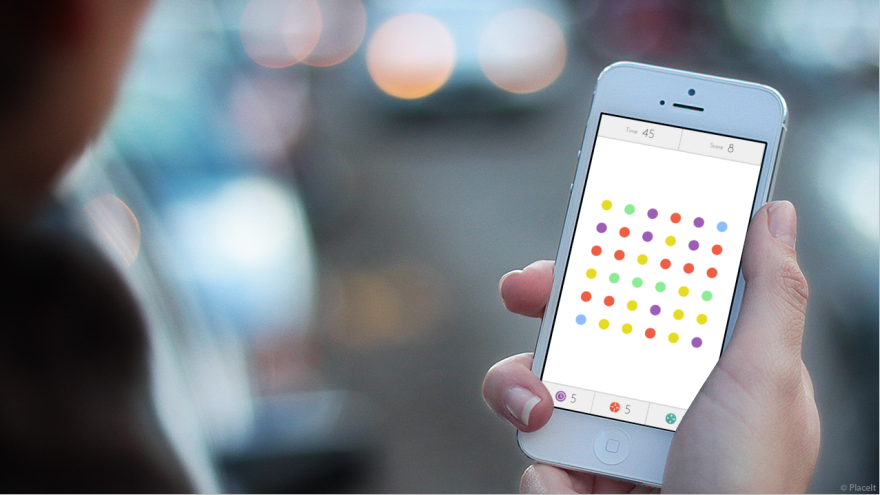 This month’s iPhone game sensation, Dots, released a slew of new features today, including a version for iPads. But the change that caught our eye is more subtle: “Shrinkers“ now cost twice as much as they used to.

For those who haven’t yet lost themselves in the world of Dots, all you need to know about shrinkers is that you need them to get higher scores, and that they cost “money.” That money is a rudimentary form of virtual currency, based on the game’s namesake dots. You can either accumulate dots by playing the game, or by paying real money at a fixed exchange rate: 5,000 dots for 1 US dollar, 13 Mexican pesos, or 55 Indian rupees, etc. Bulk purchases cost less.

Dots, in turn, can be used to buy special powers, among them shrinkers. It used to be that 500 dots bought you 10 shrinkers. Now, they get you just 5.

Paul Murphy, senior vice president of product at Betaworks, which developed Dots, explained the price increase like an economist. The change, he wrote in an email, “creates some element of scarcity with the powers” and will help the game “reach more of an equilibrium.” Murphy insists the change isn’t about making more money from Dots, which doesn’t cost anything to download and is generating far less revenue than other free games for Apple’s iPhones and iPads.

Setting prices is difficult enough in the real world. Virtual economies can make it even more complex because game developers also act as central bankers. For instance, Diablo 3, a role-playing video game from Blizzard Entertainment, recently fell victim to hyperinflation resembling that of the Weimar Republic or Robert Mugabe’s Zimbabwe because the money supply wasn’t properly controlled. The game’s virtual gold is now about one ten-thousandth of its value a year ago.

Many games also run into monetary problems because, while people in the real world prefer to make their lives easy, gamers relish a challenge, which is known as “the problem of fun.” That seems to be the case with Dots.

Dots players, whose obsessiveness is perhaps exemplified by the 2,200-word strategy guide we published here at Quartz, have been accumulating dots faster than Betaworks anticipated, Murphy said. (The game has been played more than 250 million times. At 60 seconds per game, that’s more than 475 years of collective gameplay in less than a month.) Shrinkers, the game’s cheapest and most popular power tool, were easy to obtain—I called them “relatively cheap” in that guide—throwing the supply-and-demand curve for dots out of whack.

“If our math is right, it actually shouldn’t result in people needing to spend any more money,” Murphy said of the price increase, “but our hope is there will be greater value (and a sense of scarcity) placed on the shrinker.”

Virtual economies are weird. Just ask the accountants at Zynga who had to determine whether virtual tractors sold in FarmVille should count as consumable or durable goods on the company’s books. (Durable, they decided.) Or airlines that try to make frequent-flyer points desirable but not unprofitable.

For Dots, simple pricing decisions affect the intangible experience of playing the game, which is, of course, the key to its success. In a sense, the pricing of dots is more a question of emotion than economics. In any event, unlike in the real world, consumers may be able to push back against inflationary pressure imposed by the Betaworks Central Bank: They can simply decline to update the app.