The New iOS Update Fixes Big Security Holes, So Get It Now
How Emojis Could Be Shaping the Future of Social Media

LINKEDIN JUST GAVE its desktop UI the full Beverly Hills makeover. This wasn’t a nip-and-tuck or a light rhinoplasty. It was a shave-some-bone-and-redistribute-some-toochis-fat overhaul to make the professional social network look like its frenemy, Facebook.

It is a welcome upgrade to a kludgy design that even company co-founder Reid Hoffman once conceded “needed work.” The site is cleaner, faster, and a whole lot easier to navigate.

You’ll see the biggest change on the homepage. The link to your profile sits at the upper left. Your newsfeed cascades down the middle, just below an entry field for sharing articles, photos, and status updates. To the right, exactly where Facebook places its trending topics, LinkedIn added a section called “What you need to know now.” It’s above an ad card that’s in more or less the same spot as Facebook’s ad card. 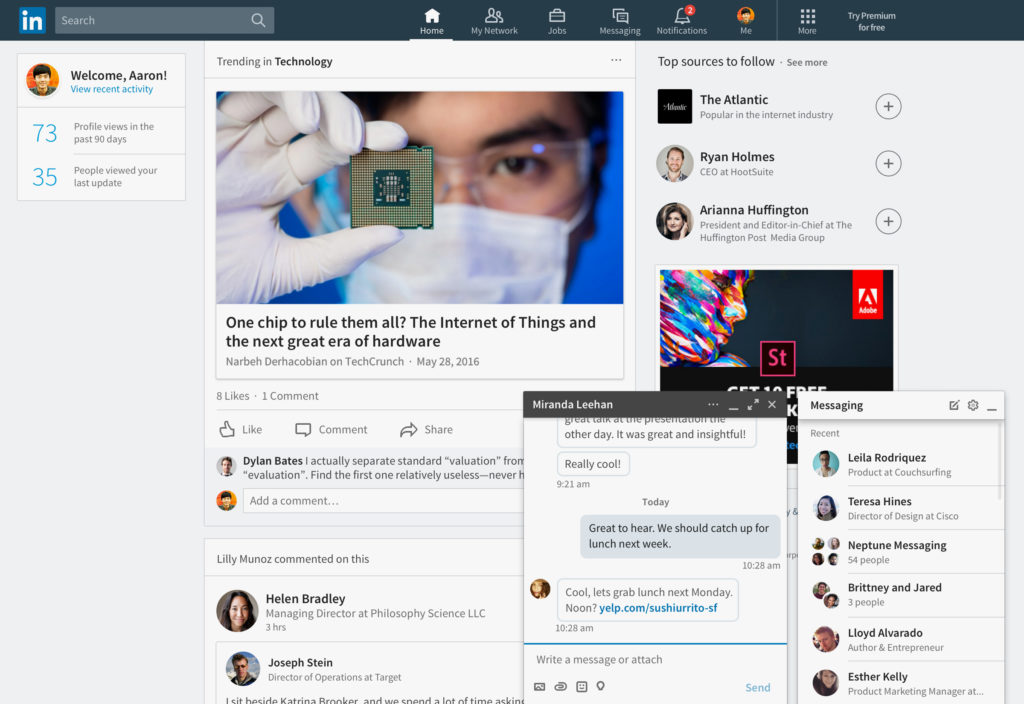 The blatant cribbing is smart. People know how to use Facebook, but even Hoffman once called the old LinkedIn “confusing.” Amy Parnell, the company’s senior director of experience design, was more charitable when she said it had “too much noise, too much cognitive load.”

“It was hard for people to understand what to do,” she says. “The goal with this design was to simplify and create focus.” The best way to do that was give users an experience they already understand. “We’re a social network, Facebook is a social network. The types and interactions and behaviors you see on the platforms are similar,” Parnell says. “From a design perspective, you don’t want to create a whole new paradigm for how you interact with that model. If someone were to create a new email application, you would expect it to look and feel like email, and for it to leverage interaction patterns that are standard to the industry.”

So Facebook is email now? “That’s kind of a cop out,” says usability researcher Gabriela Marcu, of Drexel University. But only kind of. Outward appearances notwithstanding, LinkedIn’s redesign hews to the platform’s prim, businesslike sensibilities. “They’ve done a lot of work beyond the homepage, and they’ve absolutely done it in their own way,“ Marcu says. “They’ve improved the way people message each other and search for jobs, how the platform makes recommendations based on a user’s background, how someone can use their connections to get inside information about a company. From a user-experience perspective, it looks like they’ve really thought these things through.”

Parnell’s team built the redesign using a pattern library it calls Art Deco. Parnell says it is to LinkedIn what Material Design is to Google: A visual language that informs things like the site’s grid, layout, typography, button design, and interaction patterns. Art Deco touches every corner of the redesign, on desktop and mobile. The result is a friendlier, more fluid, more cohesive user experience. The new homepage is the portal to that experience.

In that light, copying Facebook registers as even less of a cop-out. “People keep expecting these sites to look similarly and for them to interact with them similarly,” says CU Boulder’s Brian Keegan, a specialist in human-computer interaction.

Users aren’t the only ones who benefit from this convergence of strategies. Newsfeeds, trending topics, and smart, in-line messaging are features engineered to keep users engaged, and coming back. That’s good for LinkedIn, and great for Microsoft, which bought the social network in June. Parnell says the overhaul started long before the acquisition, but the redesign puts to rest any lingering doubts about Microsoft’s desire to own a competitive social network, or that it is emulating Facebook.

“This isn’t just a productivity play. They’re gunning hard for a stronger presence in social media and digital marketing,” Keegan says. And not for nothing, users can still fall back on LinkedIn’s stodgy reputation when their bosses catch them browsing at work. “If I was Zuckerberg, I would be really concerned about every Microsoft Office user being pulled into checking LinkedIn at work.”

That’s the thing about LinkedIn. For years, it’s been the (gainfully employed) square at Social Media High. This redesign could win it a spot at the cool kids table. Sure, it dresses like Facebook, but it’s still a nerd at heart. That’s a powerful combination.