50M Matches Strong, Hot Mobile Dating App Tinder Is Ready To Go Global, And Move Beyond Flirting
Iterations: How ESPN Thinks About The Future Of Its Product And Technologies 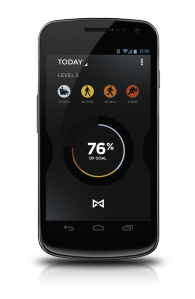 Heads up, Android fans. If you took the plunge and backed the rather sleek Shine wearable activity tracker from Misfit Wearables, you may want to get your money back. According to a recent update posted to the project’s Indiegogo listing, the Founders Fund-backed company has decided to drop Android support from the final version in a bid to better focus on polishing the experience for iOS users.

Seriously, that’s the only reason they gave, which is likely little consolation to the backers who were originally told that the Shine would support certain devices running Android 4.1 and up when the thing officially launched. But let’s back up a moment first — in case you haven’t been following the Misfit Wearables odyssey, the Redwood City/Vietnam startup aimed to inject some style into the world of personal activity tracking with the $99, quarter-sized Shine doodad that could seamlessly sync your motion information to a slew of supported smartphones. It’s not entirely unlike what you would do with a Jawbone Up or a Fitbit, except that the hardware involved was designed to be as unobtrusive as possible — a welcome quality for a device you’re meant to wear all day long.

There’s no firm count on how many Android users wound up backing the project, but I’d wager there’s a decent chunk of them considering that the project raised more than eight times the $100,000 funding goal the team was originally shooting for. For what it’s worth, the decision seems to have been made fairly recently — a response on the Misfit Wearables Facebook page posted on May 8 confirmed to one fan that the team intended to have Android support ready for the masses when the Shine officially launches in July.

That said, the team has been working on the Shine Android app for at least a few months now, and they provided a first glimpse at the app in the form a of a render (see above) before ultimately putting it on the back burner. I’ve reached out to Misfit to see if they would clarify the issues they’ve been having on the Android front, and I’ll update if/when they respond.

Sad to say it’s hardly the first time a purveyor of fitness gadgets has decided to drop support for Google’s mobile operating system. Despite claiming that an Android version of its FuelBand syncing app was in the works for the better part of summer 2012, Nike unceremoniously pulled the plug on the project earlier this year noting that it would instead focus on building out the Fuel experience for iOS and the web.