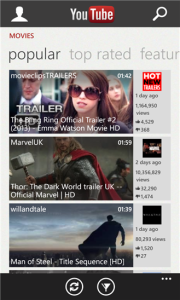 Once a upon a time, Microsoft saw fit to put together a YouTube app for Windows Phone and it was actually pretty great — it let users download videos straight from the app and there was nary an ad to be found. To absolutely no one’s surprise, Google wasn’t too pleased: after all, the features that made the app so appealing didn’t exactly jibe with YouTube’s terms of service, and the search giant demanded the offending app be removed.

Well, after a bit of back and forth (and a conciliatory update), it seems the two companies have finally come to an agreement. Microsoft and YouTube released a statement today affirming that the two companies will work together on crafting yet another YouTube app for Windows Phone that doesn’t fly in the face of Google’s and YouTube’s rules.

Microsoft and YouTube are working together to update the new YouTube for Windows Phone app to enable compliance with YouTube’s API terms of service, including enabling ads, in the coming weeks. Microsoft will replace the existing YouTube app in Windows Phone Store with the previous version during this time.

So there you have it. Frankly, the news doesn’t come as much of a shock — Microsoft was seemingly caught off-guard when Google’s ire first became known and was willing to make things right by adding those ads should Google give the company access to “the necessary APIs.” Then again, a Google representative points out things like YouTube’s the iFrame API have been open to the masses for a while now, so it’s unclear why Microsoft didn’t just go that route in the first place. While it’s refreshing to see these two work out their differences here for once (mostly because Microsoft has been poking at Google with its Scroogled campaign for months now), the real loser here is the consumer.

In just a few weeks a new, ad-laden version of the app will trickle into the Windows Marketplace and Windows Phone users who have downloaded the app will soon find themselves faced with the prospect of embracing a much different YouTube experience. Granted, it’s only one app that’s being bowdlerized, but Windows Phone has been making significant strides when it comes to app quality lately and it’s a bummer to see such a prominent app lose its charm.

In the event you’re a Windows Phone user who hasn’t yet updated your YouTube app to the latest version, you may want to wait before taking the plunge. Microsoft recently pushed a tweaked version of the app into the Windows Marketplace that removed the ability to download videos on the fly, though you still won’t be subjected to in-stream ads.