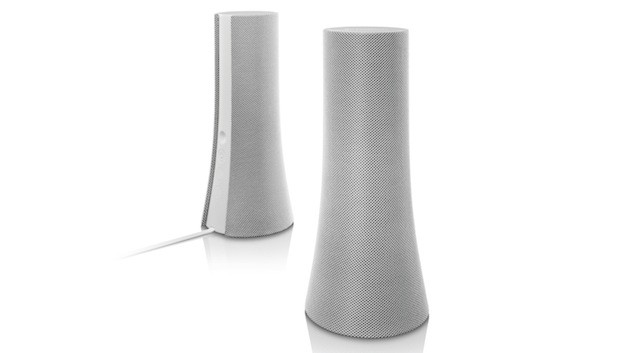 A simple, virtual stroll through the internet would easily convey that Bluetooth speakers aren’t the hot item they once were. Still, who would complain about having a vast amount of options to choose from? The latest set comes by way of Logitech with the Z600, a pair of Bluetooth 2.0 sound blasters capable of being connected to up to three devices simultaneously — the company says it’s as easy as pressing pause on one and play on another to switch between them. The Z600’s sleek looks are complemented by three undisclosed drivers in each speaker and touch volume controls; there are also a couple of alternatives to Bluetooth as well, including a 3.5mm audio jack and USB transceiver. Logitech will be putting these on shelves across the US and Europe next month for $149.99, but if you’re interested you can pre-order them now from the source below.

NEWARK, Calif.–(BUSINESS WIRE)–Today Logitech (SIX: LOGN) (NASDAQ: LOGI) introduced the Logitech® Bluetooth® Speakers Z600, an elegantly designed pair of wireless stereo speakers that complement the sleek good looks of Mac® and Ultrabook™ computers. With these speakers you can effortlessly stream music and other audio from your computer, smartphone or tablet. Three devices can be active at the same time, and switching among them is as simple as pressing pause on one and play on another.

“The Logitech Bluetooth Speakers Z600 were designed to resemble an object of art using shapes, materials, and colors that meld with the modern living space and complement the look of ultrathin laptops,” said Charlotte Johs, Logitech global vice president of brand development and portfolio for PC accessories. “And with built-in Bluetooth connectivity, a first for Logitech multimedia speakers, these speakers are ideal for today’s wireless, multi-device lifestyle.”

Whether you’re listening to music, watching a movie, playing a game or video chatting, the Logitech Bluetooth Speakers Z600 deliver clear, well-defined audio. With 3 drivers in each speaker, this system is engineered to provide superior acoustics for any space.

The controls on the Logitech Bluetooth Speakers Z600 are another integral component of the clean design. The entire top panel of the right speaker is a smooth, responsive touch disc. To dial the volume up or down, simply glide a finger around the edge. The other controls – power, Bluetooth pairing and 3.5 mm input – are hidden discreetly in the back. And because every detail is important, even the power cord has been carefully considered. Specially designed, lay-flat cables run between the speakers and the power adapter, so there’s never an unsightly tangle of wires on your desk, table or countertop.

A USB Bluetooth transceiver is included with the Logitech Bluetooth Speakers Z600 to ensure the best wireless experience with computers. Connecting through native Bluetooth may be possible, but some computers may not permit audio streaming or smooth device switching. The included USB Bluetooth transceiver also allows you to connect wirelessly to computers that don’t support Bluetooth. In addition, you can connect the speakers to any device with an audio output using the 3.5mm auxiliary input.

The Logitech Bluetooth Speakers Z600 are expected to be available in the U.S. and Europe in August 2013, for a suggested retail price of $149.99. For more information, please visit www.logitech.com or our blog.

Logitech is a world leader in products that connect people to the digital experiences they care about. Spanning multiple computing, communication and entertainment platforms, Logitech’s combined hardware and software enable or enhance digital navigation, music and video entertainment, gaming, social networking, audio and video communication over the Internet, video security and home-entertainment control. Founded in 1981, Logitech International is a Swiss public company listed on the SIX Swiss Exchange (LOGN) and on the Nasdaq Global Select Market (LOGI).

Logitech, the Logitech logo, and other Logitech marks are registered in Switzerland and other countries. All other trademarks are the property of their respective owners. For more information about Logitech and its products, visit the company’s website at www.logitech.com.