Doing your homework may net you more than just a good grade in school. Two young designers have just found out that it may lead to a big company snapping up your tiny design firm. Logitech announced that it has acquired Chicago-based TT Design Labs, the tiny startup behind the crowdfunded TidyTilt iPhone case that made it big on Kickstarter in late 2011. Terms of the deal were not disclosed.

Eric Kintz, Logitech’s Senior Vice President and General Manager of Logitech for Business, explained that, as the company continues to migrate from PC to mobile accessories, it is increasingly looking for products like the TidyTilt that bring design and technology together.

“We felt that TidyTilt was a really interesting product that met our trend of focusing on mobile,” Kintz explained. He went on to point out that the company is looking to crowdfunded projects as a potential new source of innovation.

The TidyTilt was born of a class project in 2011. At the time the company’s co-founders, Zahra Tashakorinia and Derek Tarnow, attended The Art Institute of Chicago and were tasked with developing and launching a project on Kickstarter. The pair originally wanted to raise $10,000 on Kickstarter, but managed to net $223K in backer funding. 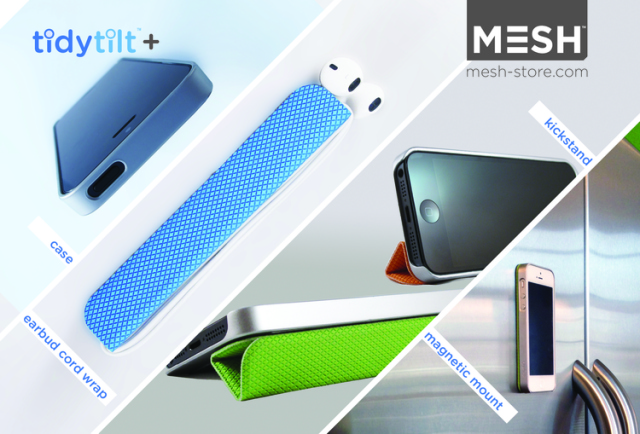 Since then TT Design Labs went on to design and launch two more products: The TidyTilt+ and the JustMount magnetic holder. Logitech will relaunch all three products this July while retaining the products’ original price point. Meanwhile, Derek will be joining Logitech as a product designer with Zahra coming on as a consultant.

This acquisition is exciting news for the crowdfunding community, although not that unique. Best Buy did the same thing when it purchased the crowdfunded PadPivot. In both cases the buyer is essentially purchasing an established product line that has a built-in fan base. Big companies with big checkbooks can sit on the sidelines and scoop up products and designers once proven by the masses.

If designers aren’t already, it’s time to start using crowdfunding as a living portfolio. Prove your worth by standing taller than peers. Even if the product/startup isn’t successful, the experience is invaluable. After all, as the common edict in Silicon Valley states, startup experience is more valuable than an MBA.