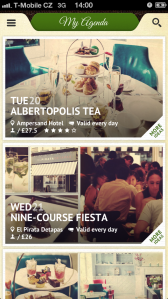 You live in London. You have bags of disposable income. But you just can’t find the time to work out how to spend your spare time. Don’t despair first-world problem-ers, Lime&Tonic, a new iOS app, has you covered. Described as a digital concierge service for the more affluent, the app provides personalised recommendations of “unforgettable” experiences to help users fill their social agendas.

The curated experiences — such as dining, afternoon tea and other affluent people’s activities – are provided by the premium merchants that Lime&Tonic works with, such as Michelin restaurants or 5-star hotel brands. These personalised offers are also how the UK startup generates revenue, of course.

Upon registering with the app, users fill out their personal profile with information such as any food requirements, or — and I kid you not — how they like their coffee, steak cooked, or any favourite cocktails. Lime&Tonic’s algorithm then kicks in to provide those personalised recommendations, once or twice per day, of things to do. In addition, Lime&Tonic shares elements of a user’s profile data with its partner merchants to ensure the best possible experience. The app also has a built-in calendar to help users plan upcoming events. 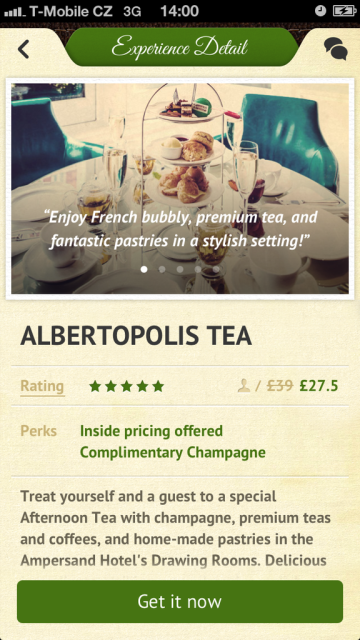 Competitor-wise, Lime&Tonic says it does’t see itself as competing with traditional concierge companies who are usually paid by the end consumer for a completely bespoke service. Instead, the startup is talking up itself as a “tech play” by providing a large marketplace of pre-vetted and curated experiences which can then be tailored and personalised utilising the data provided by the end user.

To that end, Sosh in the U.S., and UK startup Yplan could be considered as Lime&Tonic’s closest competitors. However, Lime&Tonic says it differentiates itself by focusing on unique and personalised experiences rather than mainstream offerings.

In addition, unlike say the Groupons of this world, Lime&Tonic does not require merchants to provide discounts to be listed by the service, but instead guns for unique value-adds or perks for its members that aren’t available to the general public.

It’s also powered by recurring rather than limited time inventory (e.g. event tickets), meaning that once an experience is added to Lime&Tonic, it’s typically available for 6-18 months, and for repeat purchase. The company says this means that Lime&Tonic functions more like a vetted market place of premium experiences where merchants have access to a dashboard and can turn seasonal experiences on/off, and run special promotions, rather than a flash sales site that requires a large sales force to continuously win over new merchants or offers. In other words, Lime&Tonic’s model is potentially a lot more scalable.

As well as London, Lime&Tonic is available in Dubai, Prague, Rio, Sydney, Amsterdam, and Melbourne. It claims 71,000 paying customers to date, and currently works with over 200 merchants, offering 850 experiences across the cities it targets. The startup plans to add another 3 cities by year’s end, and be in a total of 20 cities by the end of 2014.

Lime&Tonic’s revenue model is straightforward: It makes money by charging merchants a listing fee or taking a commission on any subsequent transactions.