92% of Smartphone Owners Use a Google App
Goodwerp, feel the ease of managing your firm 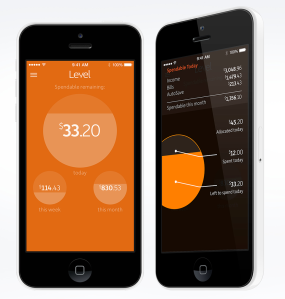 There’s no doubt about it: managing your personal finances is boring. Even though handwritten budgets and meticulously crafted spreadsheets are being joined by services like Mint and Simple that let more you easily dig into your spending, some folks just can’t be bothered to spend their free time mulling over that stuff.

And that’s where a startup called Level comes in. The nine-person San Francisco team has built an iOS app that it hopes will get a generation of young people thinking more about their financial fortitude, and it’s closed a $5 million Series A led by KPCB to help push that vision forward.

“For the vast majority of this group, personal finance is looking at an ATM receipt before throwing it away” CEO Jake Fuentes told me over the phone.

But let’s rewind for a moment first — how does the app actually work? Level’s onboarding process is mildly reminiscent of Mint’s in that it prompts users to connect their bank and credit card accounts (which isn’t much of a surprise since Level has inked a partnership with Mint owner Intuit). From there, it chews on all of that account data and figures in your recurring payments and savings deposits so it can spit out a few easily-digestible numbers.

At a glance you’ll be able to see how much money you can get away with spending during the rest of the day, the week, and the month, and new transactions are added to the mix in real time so you’ll always know where that limit lies.

The key to Level’s approach is simplicity. To better capture the attention of a generation of app-weary Millenials, Level designed the app to be as unobtrusive as possible without skimping on the functionality. If this all sounds a little quantified self-y, well, that was sort of the point. Every time you fire up the app you’re treated to that same view of those same three numbers, but peering beneath the surface reveals a transaction tracker and more granular controls for defining your savings goals. Even if you miss all those extra bits or go over your limit, Level still thinks you’re better off than before. It’s like wearing a Fitbit — you may not always hit your daily walking goal, but at least you have an understanding of what you were able to do in a day. A little information can go a long way.

To hear Fuentes tell it though, the Level Money is only the tip of the iceberg. The app and the sort of in-the-moment financial thinking it’s supposed to inspire are meant to act as a foundation that can eventually be extended to help build tools to tackle more pressing financial issues. Eventually the team hopes to help users tackle paying off student loans and buying cars, though at this point it’s still unclear if they’re going to roll out separate services for those use cases or just bake them all into that single app.

But for a startup that’s goal is to shine a light on its users’ finances, it’s still awfully cagey about the subject of how it’s going to make money for itself. Fuentes says Level is going “do what’s best” for that younger generation of consumer since they’re underserved by banks and other financial organizations, and that its monetization plans will have to reflect that creed.

“We don’t exactly know how monetization is going to evolve,” he said. “But there’s going to be a lot of ways to monetize and preserve that spirit.”