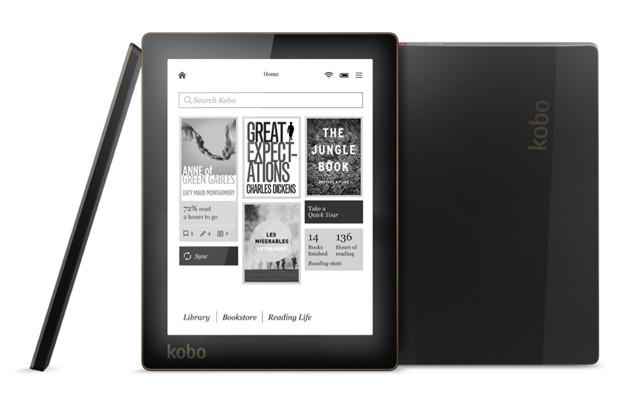 It was around this time year that Amazon showed off the Paperwhite at an event in a Santa Monica airplane hangar, debuting a front-lit display technology that would blow the months-old Nook Simple Touch with GlowLight out of the water. A few weeks later, Kobo introduced the Glo, which featured illumination that put both of the aforementioned readers to shame. Back in April, the company added another member to the family, a — get this — luxury e-reader. Kobo made it very clear that the nearly 7-inch device was a limited time only deal — that is, unless the thing actually sold. Four months later, the Aura HD comprises nearly a quarter of the company’s global e-reader sales. So, naturally, the product is sticking around. It’s also serving as the inspiration for the Glo’s successor (the Glo, too, will stick around — though there’s no word on price cuts to that device just yet).

The Kobo Aura is, as its name implies, a smaller sibling to the Aura HD, with a standard-sized 6-inch E Ink display. And as ever, the company’s also including that best-in-class front light technology here. CEO Michael Serbinis tells us that his company has also worked directly with E Ink this time out to greatly reduce those full-page refreshes that we’ve been accustom to seeing once every six pages or so amongst the last few generations of readers. The Aura is also the thinnest and lightest 6-incher Kobo’s offered, at 0.32 inch thick and 6.1 ounces (compare that to the Glo’s 0.39 inches and 6.5 ounces) — a qualifier the company no doubt added to acknowledge the existence of the five-inch Mini.

As we noted earlier, the body of the reader has taken a few aesthetic cues from the Aura HD, namely the rear, which swaps the tired old diamond pattern for the crooked soft touch back — one that looks to be a more accommodating to the human hand, à la the Nook Simple Touch. You’ll be able to get the reader in either the standard black or pink, because, well, why not? Inside, you get a Freescale i.MX507 1 GHz process and 4GB of storage, expandable by way of a microSD slot. The battery, meanwhile, gives you an estimated two months of reading time, based on 30 minutes of reading a day with the WiFi switched off. On the software side, Kobo lets you take notes, highlight, find definitions and share favorite passages over Facebook. You’ll get 11 different fonts, 24 sizes and various weight and sharpness adjustments to make reading that much easier.

The Aura is up for pre-order today. It’ll start shipping next month for $150. That’s a price bump over the Glo, though as Serbinis explains it, the Aura HD taught the company, among other things, that “the people that are the most passionate readers are willing to pay for that experience.” Time will certainly tell, though even with improved specs, standalone readers are facing ever-increasing competition from the explosion of tablet and smartphones. And here in the States, the company’s had some trouble regaining its footing after Borders shut its doors (though the US has never been the primary target for the company).

Kobo also announced a slew of new tablets at today’s event in New York. We’ll have hands-on with all of the above for you, shortly.