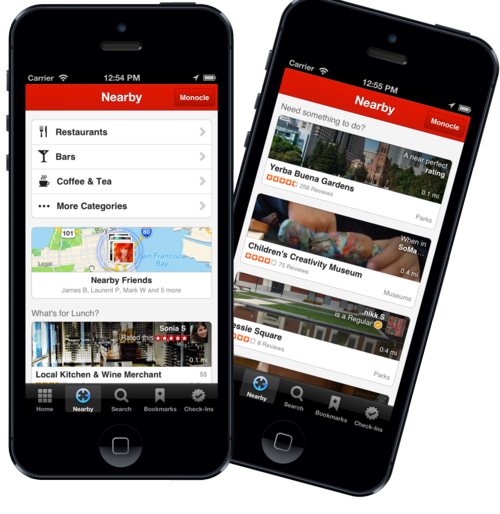 Local search and reviews app Yelp is now serving up nearby venue suggestions to people based on a variety of factors, including previous check-ins, reviews, and friend activity.

The recommendations feature is included in the latest version of Yelp for iPhone and bears a striking resemblance to Foursquare’s Explore neighborhood discovery assistant. Venue suggestions are now included in the Nearby tab on iPhone and are said to be coming soon to the company’s Android application.

“Imagine it’s noon and you’re hungry for lunch, but don’t want the same old ham n’ cheese from the corner deli. A quick visit to the Nearby page might bring up a highly rated spot around the corner that is known for their banh mi and has been reviewed by one of your Yelp friends,” product manager Travis Brooks wrote on the company’s blog. “You might also see a place down the block where a bunch of Yelpers are checked in right now.”

Suggestions are based on users’ location, previous Yelp check-ins and reviews, Yelp friends’ activities, as well as the time of day and weather, Brooks said.

For those who’ve long turned to Foursquare to unearth a new watering hole or karaoke joint, Yelp’s updated Nearby tab will look familiar — very familiar. Even Yelp’s suggestive prompts, like “Looking for an afternoon bite?,” have a reminiscent ring to them.

But 4-year-old Foursquare has made a number of additions to its apps in recent months to assist local searchers in gathering detailed business information, information Yelp has long been famous for. The startup’s mission of late is to make itself known to the masses, who’ve balked at the idea of checking in everywhere, as a better version Yelp. Perhaps turnabout is fair play.