Startup LiquidM is launching a new platform today for ad networks, trading desks, and operators to manage their mobile ad campaigns. The company is also announcing that it has raised $5 million in Series A funding from Blumberg Capital, Earlybird Venture Capital, and Asset Management Ventures.

CEO Christof Wittig comes from a software background (rather than one in media), and he said that as he got more involved in the mobile industry, he said he was surprised to discover that mobile ads are “much less software-supported” than he expected. In other words, he found that mobile campaigns are usually managed through a time-consuming mix of in-house technology, “point solutions”, and products like AppNexus which aren’t built specifically for mobile.

LiquidM is offering what it says is a “full stack” platform that manages everything from premium to performance ads. Features highlighted by the company include drag-and-drop campaign setup, integration with third-party rich media providers, support for real-time bidding, and targeting based on geography, demographics, devices, and more. Wittig emphasized that LiquidM serves as an agnostic technology provider, and is not a media company itself. 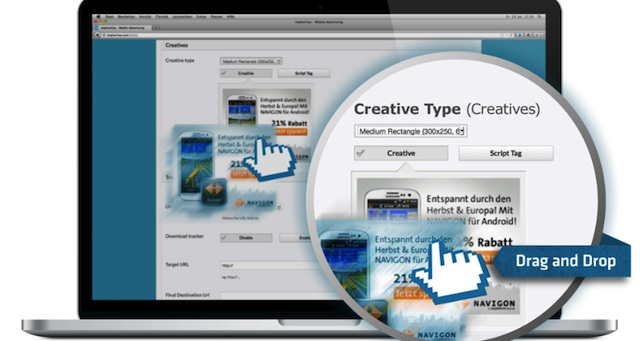 He argued that having a platform that’s “built from the ground up for mobile” is crucial. For example, he said that when traditional ad management platforms move into mobile, they tend to focus on mobile websites while treating apps as a “black box.” Chief Product Officer Roi Chobadi added that focusing on mobile also allows advertisers to take advantage of unique targeting capabilities — for example, using LiquidM, they could combine their location data with U.S. Census data to target their ads at specific demographic groups.

Asked about the role of multi-screen advertising, Wittig said he agrees in principle that advertisers are interested in reaching audiences regardless of what device they’re using — but that doesn’t mean a single ad management platform can handle everything.

“Bundling happens as it makes sense up the food chain, but the technology, what happens under the hood, is 100 percent different on mobile,” he said.

The technology was originally developed by European mobile ad network Madvertise to serve its own needs, Wittig said, then as LiquidM decided to tackle this problem, it acquired the product and the team, while Madvertises focuses on its network business. (LiquidM is headquartered in San Francisco but product and tech development continues in Berlin.) In fact, Madvertise Media is now one of LiquidM’s customers, as are M&C Saatchi, Orange, Fetch, and Mobilike.