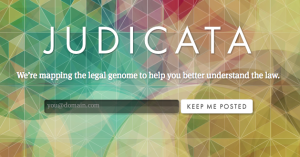 Judicata, a legal research startup, has closed its second round of financing, a $5.8M round led by Khosla Ventures. Keith Rabois, a former PayPal and Square executive who recently joined Khosla Ventures, will take a seat on Judicata’s board. The new round comes just five months after Judicata raised a first $2M round involving Rabois, Peter Thiel, Box co-founders Aaron Levie and Dylan Smith, and David Lee and his firm SV Angel.

I visited Judicata at its offices in San Francisco last Friday to meet the team and see what they are working on. The three founders are Itai Gurari, Blake Masters, and Adam Hahn. Gurari, the CEO, is a lawyer and engineer who worked previously at Jones Day (a large global law firm) and at Google on Google Scholar. Masters, also a lawyer, has done stints at Box, a law firm, and Thiel’s Founders Fund. Hahn, the CTO, was an engineer for over three years at Adap.tv, a video advertising company.

At a high level, Judicata turns unstructured legal text into structured data, and then provides lawyers with a smart interface to that data. The company uses the more user-friendly tagline “mapping the legal genome.” The goal is not to replace lawyers, but to use technology to make them better. Judicata does this with a combination of automated, semi-automated, and manual tools, processes and people on the backend.

This strikes me as the right approach, having attacked many of these problems myself in the past for a Stanford Law School research project that spun out as Lex Machina, another young player in the space (which also raised a financing round recently). Plain English is hard enough for machines to process, but legal text, which few humans can penetrate, and often only then with special training. is even harder. So what Judicata has accomplished so far, and the speed with which it got there, is impressive.

What Judicata has built contrasts starkly with the incumbents in the legal research market, LexisNexis and Westlaw. Those giants, both owned by multinational publishing conglomerates, are severely behind in technology. Lawyers and law students spend years mastering arcane search syntax and poring over page after page of search results. Although both have launched UI-centric product refreshes in recent years, the underlying technology still dates back years, and in some cases decades.

Judicata, and other young legal technology companies, on the other hand, have no crippling legacy code, and instead leverage open source text analytics, search and cloud computing tools and bodies of knowledge that have blossomed in the last decade. (Lex Machina is advised by Andrew Ng and Chris Manning, experts in machine learning and natural language processing in Stanford’s Computer Science Department.) One advantage the incumbents have is large staffs of lawyers who have hand-coded and organized cases for decades. Judicata will do some of this, too, but with a more scalable hybrid human/machine system based on its more advanced technologies.

Why did Judicata raise so much cash and how will they spend it? The founders say this comparatively large round allows them to “do everything, and do it well.” With the technology kernel largely in place, the plan now is to build out structured legal content by subject area and jurisdiction. They hope to have a beta release for California employment law this summer, which will help iron out scaling and other issues before accelerating into nationwide, full-spectrum coverage. Scaling to this level of coverage will take both significant manpower and engineering resources, and to that end, they will soon be hiring engineers and lawyers. Distribution will also be challenging, given the position of the incumbents. For example, to hook lawyers while they’re young, both Lexis and Westlaw give law students free access, send representatives to every law school in the country, and hire current law students to promote their services.

I asked the founders what they thought the future held for Judicata. Despite some big exits in legal technology in the past, Gurari says they want to build an independent operating company that will change the way law is practiced. It’s an ambitious goal, but this team is well-connected, well-funded, and well underway.

Disclosures: Ansel Halliburton worked on the Stanford IP Litigation Clearinghouse, which spun out as Lex Machina, but he does not hold shares in the company. Through his law firm, ComputerLaw Group, he also contributes to chapter updates for a treatise on software law that is published by Thomson Reuters, which owns Westlaw.