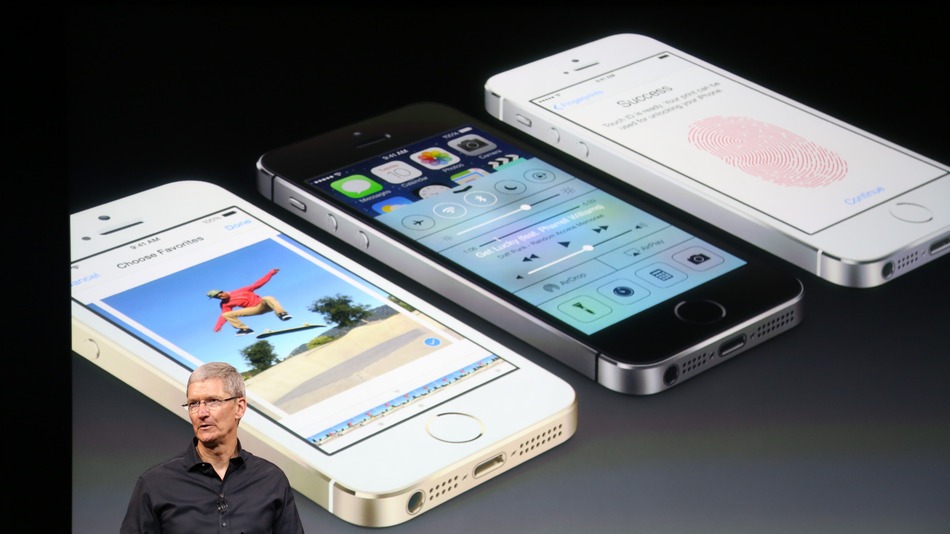 Apple’s iPhone 5S and 5C unveiling was perfectly executed, but not transcendent, and I’m OK with that.

I’m not going to lie to you; I was actually somewhat relieved that Apple only introduced two products on Tuesday. Not that I wouldn’t have loved to see more, but when you’re doing the sprint also known as live blog, you cherish the finish line almost as much as the product deets. So thank you, Apple, for that.

On the other hand … Just two products and one of them is essentially a very smart and colorful reskinning of a previous product? Color me surprised.

Apple’s new iPhone 5S and iPhone 5C were widely anticipated, which meant that surprises, if there were any, would come from a third thing. There was no third thing.

Apple did not unveil an Apple TV update (though a software overhaul is rumored for next week). The company did not reveal either an Apple HDTV or a wearable device. I really didn’t expect them to.Even so, there was that moment when I thought, “Wait, that’s it?”

Even as Elvis Costello wrapped up with his three- (or was it four?) song tribute to iTunes radio, I still believed Apple CEO Tim Cook might do a Steve Jobs “One More Thing” trick. I was wrong. Cook was done and ushered us out of the Town Hall and to an adjacent demo room.

Of the two new phones, Apple’s iPhone 5S is the only truly new product. That is if you measure fresh product by new features and technologies. The iPhone 5S is packed with new parts and has its showiest new feature on its body: the Touch ID fingerprint scanner.

Though the iPhone 5C looks all new, it’s rather like Apple took an iPhone 5 body and wrapped it in bright, durable plastic. To be fair, the differences are more than skin deep. The 5C bucks Apple’s recent trend of putting the metal and antenna on the outside and hides all of the metal chassis underneath its eye-catching skin.

Correct me if I’m wrong, but it appears that Apple has been slowly shifting to this less-is-more approach: One major product and one minor. Not two or three majors and a minor. To be fair, all extra majors were usually a “One More Thing.” Tim Cook’s Apple does as good a job as Apple ever did telling the story of their new technology. I mean, I walk out of an Apple event with a complete understanding of what’s new and why I should (or at least Apple thinks I should) care. Apple remains the master in this regard.

However, Cook’s events are a lot different than Steve Jobs’. There’s a bit less showmanship and a little less, “Let me show you.” Marketing head Phil Schiller walked us through the iPhone 5S features, but the experience did not feel as, well, intimate as it did when Steve Jobs would do it.

Steve Jobs overworked “magical.” There was, on Tuesday, no shortage of superlatives to describe Apple’s new products. Tim Cook is particularly fond of “incredible.” I agree with him that some of what I saw in the iPhone 5S deserves that description, though “magical” takes the sentiment to a whole other place, doesn’t it?

As I sat into my Town Hall chair, with Twitter founder Jack Dorsey right behind me and former Vice President Al Gore just two rows ahead, the realization that there would be no “one more thing” slowly sunk in. As it did, I finally understood that there were, in fact, three products at the event, though only two were new.

Apple’s brand new mobile operating system iOS 7 was the one more thing. It was part of both the iPhone 5S and iPhone 5C story. For the latter, it was as if Apple designed the phone bodies and mobile OS at the same time (which it probably did). For the former, there are many things you can do on the iPhone 5S that are clearly a marriage of hardware and software.

iOS 7, for example, is already 64-bit ready, as are all the preloaded apps — a perfect match for the 64-bit A7 CPU. Every new feature in the iSight camera is enabled by the iPhone 5S’s new A7 chip. Without cool new photo features and, of course, the redesigned Photo Library interface, there’s no way to show off the mobile CPU’s image chops. Real-time exposure adjustment, smile recognition, burst mode, slo-mo, these are all CPU-intensive tasks, but without an OS to show them off, well, you get the picture.

Some might argue that iTunes Radio was the “third thing.” Sorry, but this streaming music service is part of the mobile OS and even though Costello was on stage to, sort of, sing its praises, it was not really treated as a stand-alone product at the event.

As I see it, iOS 7 was the rest of the Apple event story. It was a thread that wove itself throughout and I think there’s very good reason for that. This seventh edition is the most radical reimagining of the mobile OS since it was launched. iOS 7 is not just a new face, a paint job for a modern generation of iPhone users or even something to appeal to kids.

I know some people are disappointed: The iPhone 5C isn’t cheap enough. There was no “third thing.” Samsung is doing more. They may be right. $99 is not free, there were zero surprises and Samsung’s Galaxy S4 phone watches you. On the other hand, all this criticism misses the point.

As always, Apple delivered the products and innovations it believes its customers want. It micro-targeted the 5C at China (and price-conscious U.S. consumers), and moved the state of the art a bit further along, The decision to make, with Touch ID, security a center piece of its new product is telling and savvy. Security speaks to a basic human concern and is also has a direct connection to privacy, something that is now, more than ever, weighing heavily on consumers’ minds. Since Apple’s probably been working on the 5S for well over a year, it’s hard to imagine that it really did this in response to NSA-driven fears. Still, they are quite canny, aren’t they?

I have no doubt Apple will sell millions of iPhone 5S’s and expand its smartphone footprint with the new iPhone 5C. Is all this enough to beat back Samsung? It’s too soon to tell. What is clear is that Apple is not very interested in a tit-for-tat features battle with Samsung (or any other phone manufacturer). It’s choosing to:

2. Add features that virtually any potential iPhone customer can grasp and appreciate.

Is that a winning strategy? You tell me.