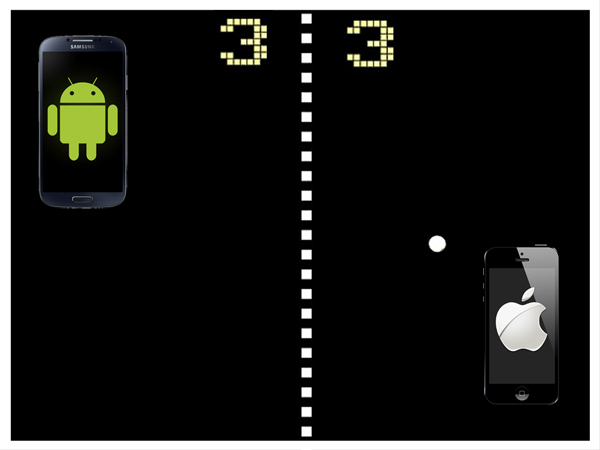 When the iPhone arrived six years ago, it was the hot commodity. It didn’t take long for Apple’s sleek, powerful smartphone to dominate the mobile phone market — and one of its greatest draws was a rapidly growing software marketplace, curated and quality controlled, bringing extraordinarily useful features to what was essentially a pocket-size computer.

However, competitors weren’t far behind. Some have continued on, others have failed; but by far the biggest is Internet giant Google’s mobile operating system, Android. In fact, the number of Android devices activated outnumbers iOS devices by a mile — 750 million Android to 600 million iOS.

Nevertheless, as we and many of you well know, the iTunes app marketplace seems vastly superior in quality of content, in spite of Apple’s barriers to entry, such as a registration fee for app sellers, and the fact that Google Play is rapidly catching up in terms of quantity and downloads. Apple has pipped 50 billion downloads across over 900,000 apps, while Google Play is currently counting down to that number across 750,000 apps. But there’s an even greater discrepancy in app revenue. A massive 76 percent of the entire revenue generated by apps goes to iOS — leaving the other 24 percent of the pie to all other operating systems.

A difference of hardware
And that’s just one of the reasons why top-tier mobile developers tend to prefer the iOS platform. “The iOS ecosystem has consistently excellent devices, a great operating system that users keep up to date, and an App Store where the consumer is willing to pay for a better experience,” Simon Joslin of The Voxel Agents, the developer of the Train Conductor games and Puzzle Retreat. “On top of that, as a designer, it’s absolutely preferable to be building games that will be experienced exactly the way you intend them.”

When a game is launched for Android, often there are devices on which the game will be buggy — and, for the developer, that means applying fixes for a range of devices. Or, at launch, the number of devices on which the game will run is limited, leaving some Android users annoyed when they don’t read the list of compatible devices. Conversely, Apple’s device set is relatively homogeneous, meaning applying a fix is, in comparison, a simple matter.

To Joslin, that’s definitely a good thing. “It means you know how your users are going to experience the game, from initially finding it on the store to finishing the last puzzle,” he said. “The consistency lets me focus on producing the perfect experience, and spend less time supporting the variety and handling edge cases.”

Not all developers feel the same way. Chris Murphy of Pub Games, developer and publisher of BlastPoints for iOS and Android, told CNET, “iOS hardware is standardized, which is nice; however, the tech is pretty rigid, and there’s a much slower feature iteration between devices when compared to Android, which is frustrating for high-end game development.” He also added that although Apple’s standardization means that it’s easy to get a game right across all iterations of an iPhone, the older models make it difficult to create a truly optimum game.

Android, on the other hand, has an almost opposite set of problems. “Android devices can be very powerful; however, they are far from standardized, and often developed with very specific strengths in mind: effects may run amazingly well on one device, but the rendering of the world may be causing a bottleneck, whereas on another device, it’ll be the exact opposite, with the effects as the bottleneck,” he said. “Trying to find a happy medium feels like you’re compromising on quality a bit and instead additional systems and controls need to be developed to support the development properly. That in mind, once you get those systems in place, you can really make the devices shine. The Android store currently lacks some of the titles that really made a splash on iOS, and I think that leaves it with more potential to stand out for developers.”

One problem with the Google Play store, though, is the vast amount of dross and adware, something that the iTunes developer entry fee does better at eliminating. Then there is Google Play’s app discovery, which leaves a lot to be desired. New apps are hard to find, the search function often turns up more trash than treasure (ironic for Google), and the featured apps update sporadically, compared to Apple’s weekly hand-curated showcase.

The right price
Another big problem with Google Play is that in order to make the apps attractive to customers, who can very easily pirate the apps for free elsewhere, an upfront price often has to be forgone. In order to pirate iOS apps, you need a jailbroken device, which voids the warranty and deters potential pirates. Conversely, one of the major positives for Android consumers is that you can sideload whatever you like — but this doesn’t work out well for developers.

“Piracy is a very unhelpful practice, and it does sadden me that people would rather steal 18 months of my creative efforts instead of paying 99 cents for it,” Joslin said. “First-day sales of Train Conductor 2 on Android was 200 units; first-day pirate downloads were 35,000.”

Murphy’s sales have been affected, too. He noted, “We were hit pretty hard with piracy for BlastPoints, and it was an extremely strong influence in how we approached our next few patches and Android release.”

Chris Wright of Surprise Attack, an agency that promotes mobile games, added, “I remember searching for press coverage on one game we helped launch on Android last year, and for every review, there were maybe nine results for torrents of the game.” He added, however, “Piracy is a tricky thing to evaluate. A pirate download is not necessarily the same as a lost sale. It certainly has some impact, but you can’t quantify it.”

The piracy experience is actually pretty much par for the course for Android developers; yet, short of refusing to release content to open platforms, there’s little that developers can do. Doing so, however, punishes customers who wish to purchase and enjoy a product legally — and it cuts off a potential revenue stream. Nevertheless, while this is an avenue The Voxel Agents chooses to eschew, many developers either delay an Android launch or don’t release to the platform at all.

Perhaps it’s the differing markets that contribute to piracy. On one hand, tech-savvy users tend to gravitate toward Android, lured by the customisability and open platform — users who are more likely to know how to find and upload pirated apps.

On the other hand, the variety of Android devices at different price points means it’s more accessible to those with less disposable income; users who are less likely to spend a few dollars (PDF) downloading an app here or there, meaning that to gain traction on Google Play, especially as a new or indie developer, pricing has to be either low or free.

“I feel like I understand the iOS consumer better; they will pay for a good experience, they are up with the trends,” Joslin said. “The Android consumer is harder to understand, simply because of the variety of entry points into the market; some buy an AU$80 phone from the Post Office, and some research their purchase and get the high-end Galaxy S2. With those different points comes very different app usage and purchasing behaviors.”

User expectation
It’s because of these differences that the freemium model really took off on Google Play, and has become pretty standard; even with a pirated copy, unless the user knows how to get into and edit the game’s code, which is rarer than a straight-up download, freemium purchases can still be made. The model has its problems, but for developers seeking to circumvent lost sales, it’s a good solution, especially when you take into account that around 70 percent of the revenue generated from mobile games comes from freemium purchases.

That does mean, however, that users expect to find free games on Google Play, and the market has developed accordingly. As Murphy pointed out, “There are some definite differences between the stores that stand out that have ultimately had some serious effects on the products available. If you launch into the iOS store, you’re going to see a fair showing of free-to-play games, but there’s still a pretty substantial number of products making money that follow the traditional direct-purchase model. If you load up the Android store, you’re going to see an overwhelming number of free-to-play titles.”

This can be difficult for developers to navigate, firstly because consumers can be wary of the freemium model — a not unfair reaction, since a number of publishers seem to consider it as being nothing more than a cash cow — and secondly, because it can be hard to stand out when every game seems to offer the same thing.

Things are slowly changing, though. It is becoming rarer for the best games to release only to one platform. But there’s always going to be that division between the two platforms, with iTunes offering more carefully made titles overall, but Google Play offering the potential for much greater creative freedom and technical brilliance — depending on your device.

“I don’t think they will ever be the same, even if they share a lot of the same content,” Wright said. “Google and Apple have different philosophies, and that’s a good thing. Variety and choice are always good for any market, and especially good for developers and users.”