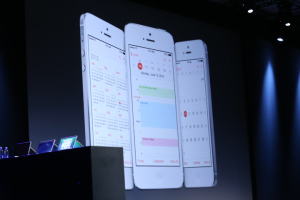 Today, Apple unveiled iOS 7 during its WWDC keynote. While the operating system boasts an impressive redesign, many features and UI choices were greatly inspired by innovative third-party apps or even competitive mobile operating systems.
The new Mail client already looks a lot like Mailbox due to the new flat UI choices. But when Craig Federighi swipes his finger on a mail, “move” and “delete” actions appeared, it was very reminiscent of Mailbox’s gestures.

Similarly, the new Calendar app now provides a new default view. At the top, you see your current week and at the bottom, a feed of your events happening right now. And if you need to jump to a later date, you’ll get a scrollable month view that looks a lot like Sunrise‘s UI. 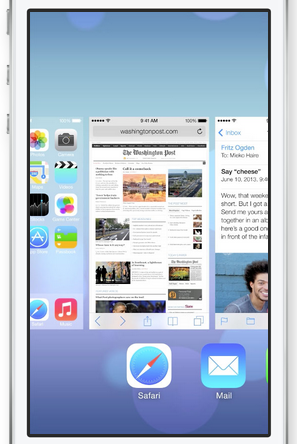 And of course, there is iTunes Radio. You can’t avoid a comparison with the ubiquitous competitor — Pandora. The little startup is now a public company and has come a long way. It defined a brand new way to listen to music. Spotify copied it with its radio feature, and now Apple. Just like in Pandora, you create your custom radio stations by picking a few favorite artists and get an endless playlist of relevant songs. 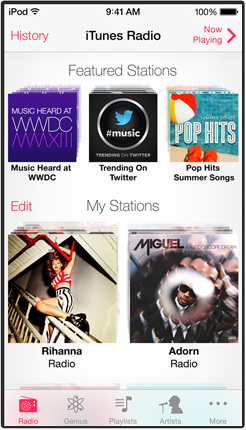 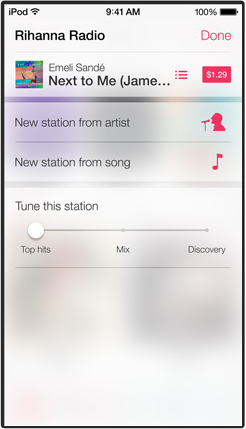 Yet, third-party apps are not alone. Even other operating systems should take cover. For instance, Apple introduced a new system-wide UI to go back. iOS notoriously doesn’t have a back button like Android, but the company found a way around it. You can now swipe your finger from the left edge of the screen to go to the previous screen in the hierarchy. This feature comes directly from BlackBerry 10.

Finally, Apple introduced a new multitasking screen that looks a lot like the now defunct WebOS. Arguably, the best thing that came out from the good old WebOS was its multitasking feature. For each app that is running, you get a card showing the app’s current state. You just have to swipe from one card to another to find the app you are looking for.

With its new flat UI, iOS now looks a lot like Windows Phone as well. The buttons and lock screens are very similar and it shouldn’t surprise anyone as Microsoft was one of the major players to popularize flat designs.

We can probably find more stealing:

Some old UI elements are still there and won’t surprise old users of iOS’s default apps. For example, the week view in Calendar doesn’t exist in Sunrise and Apple is still committed to this view. While it’s normal for Apple to copy other operating systems’ features, stealing from independent third-party developers is harder to swallow. Those small teams have created some of the best UI innovations on mobile and are not rewarded by iOS’s new major iteration.