A new U.K. study shows that the only activity to rival Internet access for men is sex 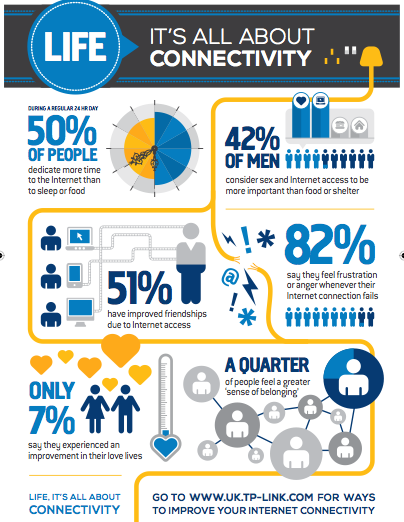 Believe or not, the plurality of men in the U.K. rank Internet access as valuable as sex and even more important than food and shelter.

That’s right, 42 percent of male respondents in a new survey by broadband provider TP-Link throw food, shelter, and sleep to the wind, while saluting Internet access as one of life’s most cherished needs. In fact, 50 percent of people say they dedicate more time to the Internet than sleep.

“As our recent research shows, in the current increasingly digital world, quick and easy connectivity is one of the main concerns in people’s minds in the U.K.,” TP-Link U.K. country manager Eric Wang said in a statement.

One of the reasons people in the survey responded so enthusiastically to Internet access is because they say it strengthens their friendships and gives them an enhanced sense of belonging. More than 51 percent of people say the Internet has helped their friendships.

But the line is drawn at friendship. The Internet apparently isn’t doing too much for people on the romantic level. Only 7 percent of respondents say the Internet has impacted their love lives in a positive way.

My question is: without food, sleep, and shelter we humans can easily die, so doesn’t that make Internet access moot at some point?

TP-Link interviewed 3,000 men and women living in the U.K. and Ireland between the ages of 18 and 55 for this survey, which was conducted in February and March of this year.