By year end carbuyers will be able to choose from several vehicles that incorporate Apple’s iPhone functions, using Siri voice controls for navigation, texting, e-mails and music. Displacing competitors in the car may be more difficult than in desktop computing or mobile phones, as the technology giant grapples with challenges including extreme temperatures, noisy cabins and long product cycles.

“It’s impossible to overestimate the difficulty of integrating an outside software system well into a vehicle,” said Eric Noble, president of industry consultant Car Lab. “Silicon Valley routinely fails to recognize this.” 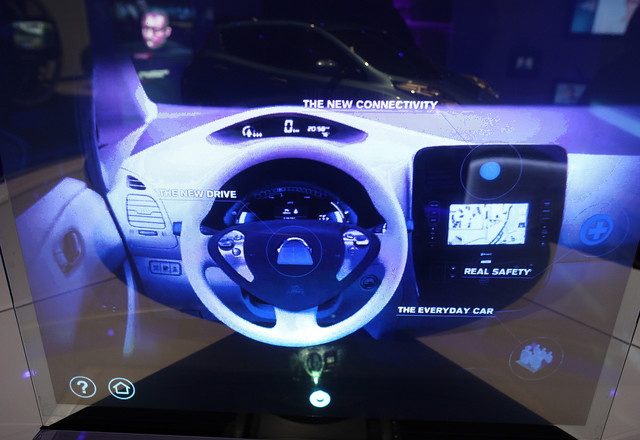 Those models use Cupertino, California-based Apple’s iOS 6 operating system in the dashboard head unit — the core of the car’s stereo — eliminating the need for separate navigation devices.

“It works well enough for some things, but I personally think Siri doesn’t work that well,” Montoya said in a phone interview. “It frequently doesn’t recognize my voice.”

The Apple-enabled system in GM’s subcompact cars wasn’t as useful for navigation and other functions as systems automakers already offer, Montoya said.

“Siri has not been designed for the car, where the cabin is often noisy,” said Chris Schreiner, a research director for consultant Strategy Analytics Inc. and a former engineer for GM’s OnStar telematics service. “Automakers tune voice systems for each car. Expecting Siri to work at the same level in every vehicle isn’t practical.” 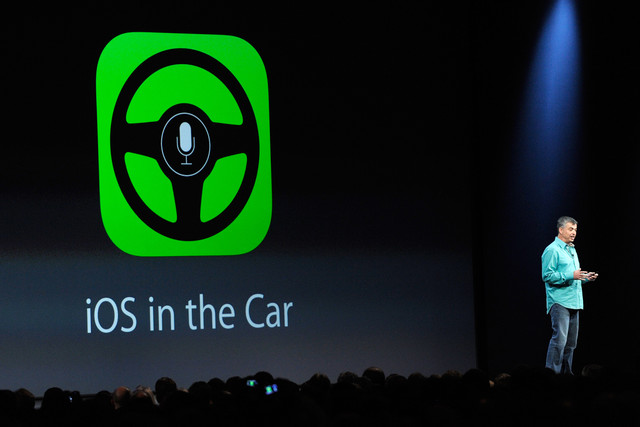 Next, Apple’s iOS 7 software will be fully integrated into models made by GM, Honda Motor Co. (7267), Nissan Motor Co. and Hyundai Motor Co. (005380), Apple said last month. Icons familiar on iPhones and iPads will migrate to the center console screen in cars.

“It’s something that people want, and I think that Apple can do this in a unique way and better than anyone else,” Chief Executive Officer Tim Cook said in a July 23 conference call. “It’s a key focus for us.”

Apple announced plans for Siri Eyes Free capability two years ago, and cars with that option are arriving now. That suggests to Montoya that the more elaborate integration steps Apple discussed in June won’t appear until 2015, he said.

“In-car infotainment, connectivity, all these things, all the technology that’s in the cabin of the car is becoming increasingly critical,” said Karl Brauer, an industry analyst for Kelley Blue Book in Irvine, California. “Apple has also got some real skin in the game. They know people want things to be seamless.”

In the early 2000s, Apple showed little interest in working directly with carmakers.

“They provided technical information to connect iPods and iPhones so people could play music, but weren’t interested in going beyond that,” said Larry Dominique, executive vice president of auto researcher TrueCar Inc. and Nissan North America’s former head of product planning. “There was no interest in doing much with us.”

While Jobs, who died in 2011, was cool to the industry, he was passionate about cars. Mickey Drexler, an Apple board member and chief executive officer of apparel company J. Crew Group Inc., last year said Jobs had wanted to try his hand at designing a car and regretted not doing so.

“Look at the car industry: It’s a tragedy in America. Who is designing the cars?” Drexler said in May 2012 at a Fast Company conference in New York. “Steve’s dream before he died was to design an iCar.”

Apple’s approach has changed, said Cook, who described auto applications as another part of the company’s “ecosystem.”

“Just like the App Store is a key part of the ecosystem and iTunes and all of our content are key, and the services we provide from messaging to Siri and so forth, having something in the automobile is very, very important,” Cook said.

Apple’s rivals have worked hard to establish a foothold inside the car that they will be reluctant to give up. BlackBerry’s QNX, with 50 percent of the 2012 market for proprietary OS in autos, and Microsoft, with 25 percent for Chairman Bill Gates, are the biggest, said Anna Buettner, IHS iSuppli’s automotive infotainment and telematics analyst.

“Apple wants a slice of that pie and Android has made a lot of noise in this space as well,” she said.

Where Apple will have the biggest impact is in music and entertainment, rather than in providing navigation and other core functions, Buettner said.

About half of all music listening takes place in autos, a crucial battleground in the $15 billion local radio advertising market. Pandora, with more than 70 million monthly users, will come installed in one-third of all new vehicles sold in the U.S. this year, the company said.

As safety regulators and customers hold automakers — not their suppliers or technology partners — accountable for malfunctions and other frustrations, automakers are progressing cautiously.

To contact the editors responsible for this story: Jamie Butters at jbutters@bloomberg.net; Anthony Palazzo at apalazzo@bloomberg.net