Last year, when GoPro’s Hero 3 Black edition emerged victorious from our intensive Action Camera Battlemodo, we noted that while it won, we had some gripes that nearly cost it the crown. This year, GoPro is releasing the Hero 3+, and it address almost all our concerns.

Did you see the plus sign in there? Kind of like an iPhone 5S. It’s subtle, and so are its improvements, but they do indeed add up to make a better camera. We were able to get our hands on the new Black edition a little early, and here are our first impressions.

From the front, the Hero 3+ Black looks all but identical to the Hero 3 Black. Upon closer inspection you’ll see that the lens looks ever so slightly different. That’s because it’s been rebuilt. The new f/2.8 lens is a major improvement. Everything is much sharper than it was before. GoPro has clearly tweaked its imaging software, too, because color balance is greatly improved. Also, look at those first surf shots in the video. Despite the fact that the sun is behind me and shining directly into the camera, you can still see my face really well. That’s a real improvement in dynamic range. There isn’t as much image distortion or ghosting, either. GoPro claims a 33-percent improvement, though we’re not sure how we’d quantify that.

The dimensions of the camera’s body are exactly the same as the last one, which means it’ll play nicely with the original Hero 3’s cases. The 3+ is ever so slightly lighter than the three, but we’re talking 73 grams vs. 75 grams, so you probably wouldn’t even notice. Under the hood, there’s a new Wi-Fi chip which boasts greater speed. That translates to less latency when you’re using the smartphone app or the included remote control. We saw it in action, and indeed it was a bit quicker, but this wasn’t a major complaint for us anyway. Our biggest complaint before was…

The biggest ding against the Hero 3 Black was lousy battery life. GoPro has addressed this by swapping out the 1050mAh (3.885Wh) battery in the Hero 3, for an 1180mAh (4.37Wh) battery in the 3+, and doing some software optimization. We did an independent test, running both cameras at 1080p/24fps. The original Hero 3 Black went one hour and 37 minutes of continuous shooting, and the Hero 3+ Black went two hours and nine, which is a very respectable 25-percent improvement over its predecessor. (GoPro claims a 30-percent improvement. Maybe it depends on the mode you’re in.) That’s definitely better, but it’s still about a half-hour shorter than the first edition of the Sony Action Cam.

One of the biggest improvements on the 3+ Black is the SuperView mode which is available in 1080p and 720p. GoPros have a sensor that shoots in the 4:3 ratio. When you’re shooting in 1080 or 720, the camera essentially crops the top and bottom of the image sensor, so it becomes 16:9. What SuperView does is that it shoots video in the 4:3 ratio, using the entire sensor, and then conforms it within the camera to be 16:9. That sounds terrible, right? Like you’d get some weird, squished-looking video. 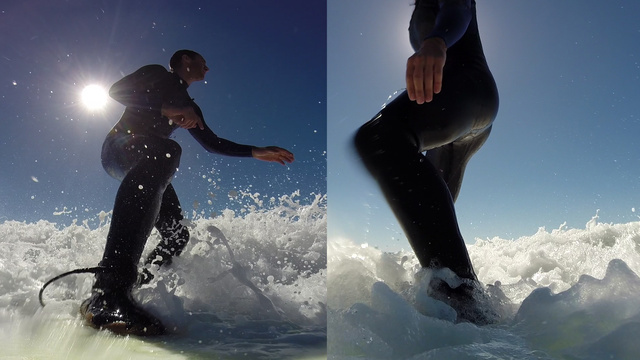 Surprisingly, it doesn’t look bad at all. In fact, for most activities where you’d be using an action camera, it’s fantastic. Look at the photo above. The board I was riding was 6-foot 4-inches (not ideal for knee-high waves), which meant I had to be pretty close to the camera. I’m standing roughly as tall in both of the shots, yet look how much more of me you can see in the shot on the left, and the warping was really insignificant. In other words, it just captures a lot more, which is something that can really improve the quality of your shots, regardless of the sport or activity.

Slightly more nebulous is the new Auto Low Light mode. It’s supposed to automatically adjust your frame-rate to give you improved low-light shooting. Lower (slower) frame-rates allow more light in, so if you’re shooting 1080p at 60fps, and you’re not getting enough light on the sensor, it may automatically drop you down to 24fps (which is as low as it will go, mercifully). We didn’t really notice much happening on this front, but we definitely haven’t given it a thorough evaluation yet. We’ll be looking into low-light performance when we do our full review.

In a feature that’s coming soon (but wasn’t ready for launch), you’ll be able to update your camera’s firmware wirelessly, using the GoPro smartphone app. Currently, you have to hook it up to your computer and manually download/install the updated software, which is a hassle. We can’t wait for that feature to go live. 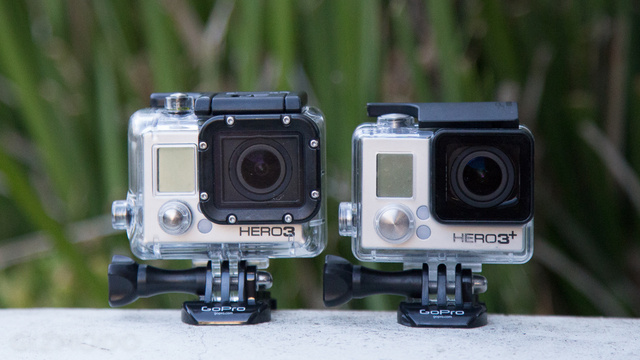 Sony recently announced that the sequel to its Action Camera will have a slimmed down waterproof housing, but it did that at the cost of making it waterproof to just 16 feet (5 meters). Sony claimed that almost no one uses it for deep dives, but people wanted something more trim and aerodynamic. GoPro has essentially done the same thing, but not to such an extreme degree.

The waterproof housing that comes with the Hero 3+ is 20-percent smaller and lighter, but it’s still waterproof down to 131 feet (40 meters). No, it’s not quite as burly as last year’s case which goes down to 197 feet (60m), but it will be a very small percentage of people that find 131 feet inadequate, and if they do, they can just put it into last year’s housing. Problem solved.

The new housing is improved in other ways, too. First, and most significantly, the buttons are fatter and much, much easier to press. Seriously, it’s a gigantic improvement. I probably took 80+ shots, and I didn’t miss turning it on or off once. Much better for the menu buttons, too. 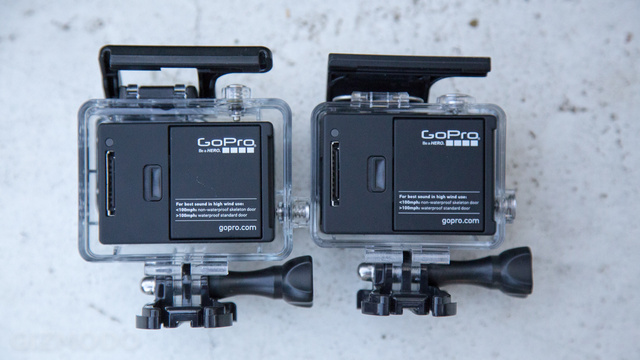 And, lastly, the camera fits much tighter into the housing then ever before. Some people complained that the Hero 3 Black would rattle around at speed, which would make for bad audio. The Hero 3+ has virtually no wiggle room.

Speaking of audio, the Hero 3+ has redesigned mics. Previously, there were mics on the two sides. Now there’s one on a side and one on top. Indeed, the mics were more sensitive, and there was a notable reduction in unwanted noise. We’re not sure it’ll hold up to the awesome mic on the Sony, but it’s definitely better than it was. 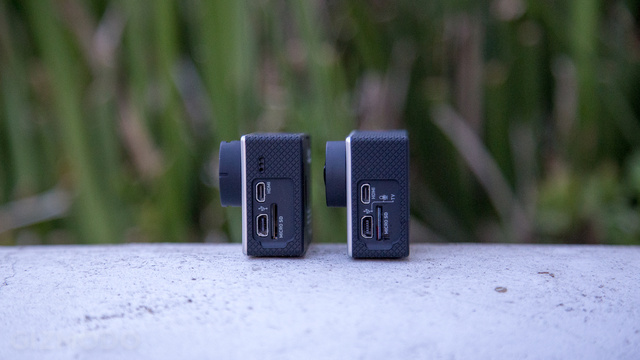 Pricing and Other Editions

Same as last year, Hero 3+ Black will run you $400, and the Silver will cost you $300. GoPro will continue selling last year’s editions (presumedly until they run out) at a discounted cost. You can now get an original Hero 3 Black for $330 and a Silver for $250.

Overall, these little things add up to a pretty large improvement, though it’s not a reinvention of the wheel. We were really hoping to see 4K video at a usable frame-rate (24FPS+), but I guess we’ll have to wait until next year. The new cameras are all available as of today. We’ll be doing some more testing and will have a deeper dive in the near future. [GoPro]