Many of today’s tech companies and startups are still building their apps for iOS first, despite Android’s growing market share. The problem stems from a lack of in-house talent, fewer Android-owning beta testers, technical hurdles, fragmentation issues, potential for revenue and more. And yet, there’s this general perception that when it comes to the size and scope of the two competing app stores, Google Play and Apple’s iTunes App Store are neck-and-neck. This is not the case.

Leaving the critical metric of revenue aside (Apple is stil reigning there), Google Play is still lacking a large number of the “top” applications, both free and paid.

The data comes from Canalys, which last week offered similar findings illustrating how both Windows Phone and Blackberry’s app marketplaces were missing top iOS and Android applications. Of the top 50 free and top 50 paid apps featured in the Apple App Store and Google Play in the United States (during the same time frame), the analysts found that only 34 percent were featured in either the Windows Phone store or BlackBerry World.

So one has to wonder what hope either BlackBerry or Windows Phone has, when even a platform as massive as Android struggles to keep up.

“The results show that Google still has some work to do itself to ensure that top iOS titles are making it into the Google Play store,” says Tim Shepherd, Canalys senior analyst, of the new findings.

In terms of the missing iOS apps on Android, he says, some are services — like Twitter’s Vine app or Twitter Music, for example — while others are utilities like flashlights or “emoji” apps, where the functionality is more important than the app’s name itself. Others still, like “Find My Phone,” are Apple ecosystem-specific.

In other words, you can try to make the argument that this data alone can’t paint a complete picture about the discrepancies between the two stores. 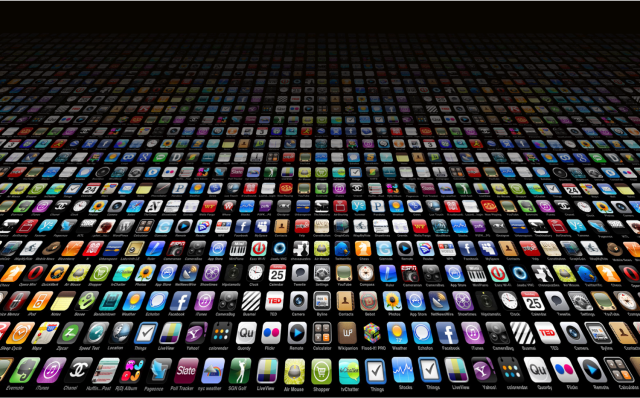 But drilling down further where brands and titles do matter, Google Play still came up short in a number of key areas. The standout category where Google Play is missing top iOS titles is games — 9 of the missing 18 apps in the top 50 free iOS titles were games, and 12 of the missing 21 paid iOS titles were also games. Included in this group were Draw Something 2, Robot Unicorn Attack 2, and Sonic Dash on the free side of things, and Kick the Buddy: No Mercy and Teenage Mutant Ninja Turtles: Rooftop Run, among the paid apps. This seems to indicate that, as studios continue to build out their lineups, they too are often going iOS-first.

Meanwhile, other notable missing apps Canalys spotted include Wood Camera and Camera+ (though there’s an impostor for the latter benefitting from the gap, as is far too common an occurrence, I’ve found). Also missing, as noted above, are Twitter’s latest expansions to video and music, plus several popular utilities.

Though Canalys was focused on the top of the charts, the problem extends much further down into the long tail, which makes the cost of switching from iPhone to Android more difficult for established users. (Having attempted the full switch myself for ages, I speak from experience. My SIM card today is in a Nexus 4, but my apps are on my iPhone 5.)

For example, some apps which early adopters — like TechCrunch readers — may miss when moving to Android include the following:

This is from a cursory glance at my own device, mind you. If you have favorite utility, business tool, kid’s games, or something even more narrowly focused – like AngelList-scouring apps aWings or Angie, for example — you’ll generally have better luck on iOS. Younger companies have limited resources for app-building, so they have to choose somewhere to start. And until reports like the latest from App Annie tell them there’s more money to be made on Android, they’ll make the choice that has the most potential to impact their bottom line.

It’s an unfortunate situation, to say the least, because on many fronts — cloud, services like Google Now, plus a willingness to experiment and push forward with innovations like NFC-based mobile payments or air gestures, for instance — Android (and its OEM partners like Samsung) lead.

Today, Android’s footprint is growing, and Samsung is breaking its own records. There’s a hunger out there for something new, but still, those missing apps matter whether they’re at the top of the charts or just those important to you. So for now, the answer to the question about which is the better platform — iOS or Android? — is “both of them.”