Ex-Apple Engineer Launches Moov, The Next Generation Of Wearable Fitness Tracking
Changers Raises $1.5M To Turn Charging Your Phone Via The Sun Into An Infectious Game

Google updated its Hangouts app for iOS on Thursday, adding new features like video sharing and stickers alongside a total redesign.

Google gave its Hangouts app for iOS a complete overhaul on Thursday — one that will look very familiar to users of other mainstream messaging apps.

The new iOS app includes tabs along the bottom of the screen with categories like Hangouts, Favorites, and Contacts, similar to other messaging apps like Facebook Messenger and WhatsApp.

The new version of Hangouts includes other features present in rival messaging apps, such as the ability to send videos, stickers, or your location within a conversation. Previously users were only allowed to send a photo. (Hangouts has always supported video calls, however.)

The new app is also optimized for iPad and includes two panes, meaning you can chat on one side of the screen while scrolling through your contacts or existing Hangouts on the other. The old version of Hangouts for iPad had only one screen, and no tabs along the bottom. 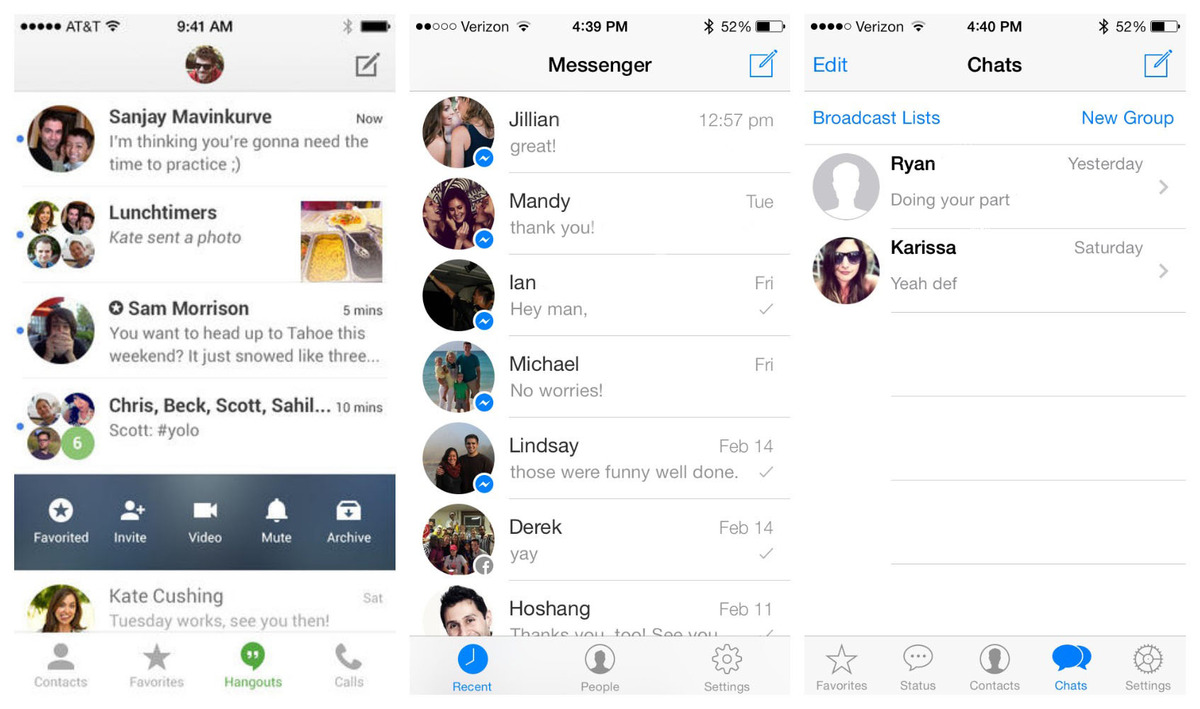 Hangouts (L) for iOS was redesigned and now looks much more similar to competitors like Facebook Messenger (C) and WhatsApp (R).

Most of these changes, including the location feature, were already available for Android users, although the look and feel of both apps is certainly different.

It’s a major change for Hangouts on iOS, and reflects the heightened expectation that mobile users have regarding their messaging apps. Messaging is the feature of the moment right now in the tech community thanks in large part to Facebook’s $16 billion acquisition of standalone messaging app WhatsApp last week.

Prior to that, messaging was still getting major attention. Last fall, Facebook, Instagram and Twitter all updated (or in Instagram’s case, added) new private messaging features.

Users can download the new iOS app in the App Store.